The Diablo 2 Resurrected launch has already seen its fair share of problems, and one of the biggest ones is the “Failed to enter game. This character is already in a game on the server. Please try again.” error message that players have been running into. This is a huge and persistent issue that’s hampered the enjoyment of many players and prevented them from playing the game. But is there anything you can do to fix this game bug? In this Diablo 2 Failed to Enter Game – This Character is Already in Game Bug Fix guide, we will examine why this error is happening, and list out your options on how to deal with it. 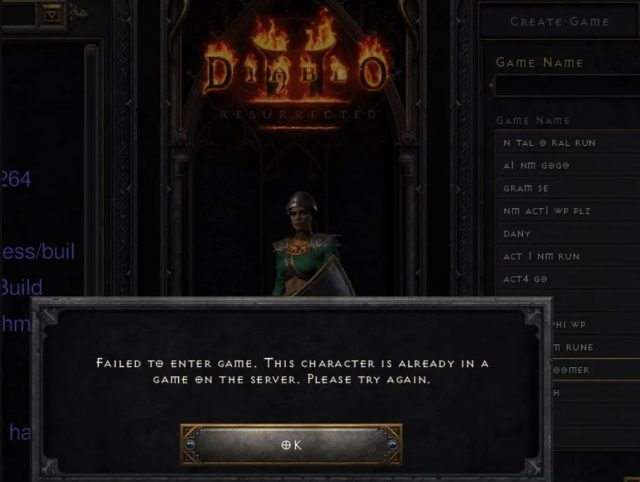 Players have tried many things to solve this problem, including restarting their computers, changing their IPs via VPN, reinstalling the game from scratch, all to no avail. If you are getting this bug, the only way you can play the game is offline. Of course, since the online component is such a huge part of D2 Resurrected, this is far from ideal.

Since this error was a major issue during the beta, one of the solutions was to create a new character, and when the new character was in game, exit, then return to your original character. Another solution is to open Task Manager, find Battle.net App in the list, right click on it and select end task, to be sure that you really closed the Blizzard application.

Unfortunately, there is still no response from Blizzard when this bug will be fixed. Like the D2 Black Screen After Launching Error, Blizzard have made it clear that they are aware of this issue. In fact, from their comments online, it would appear that the patch that is meant to fix this is set to be released soon. So, this all depends on how eager you are to play the game. While playing offline is definitely possible to do, we would still recommend you wait for a fix. Hopefully, the first big patch will manage to fix all of these outstanding issue that have plagued the launch of D2 Resurrected.