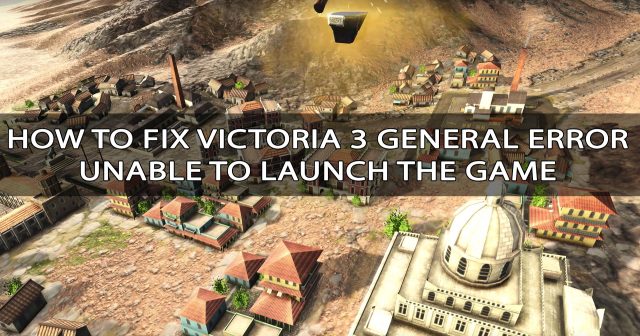 How to Fix Victoria 3 General Error, Unable to Launch the Game

According to several posts on Steam, players who tried to launch the Victoria 3 game were unable to do so. There are two errors that players usually get: “General Error – we were unable to parse the launcher setting file”, and “Launching the game failed. Please verify the integrity of your game files”. The main reason for this issue is the wrong .EXE file location in Paradox launcher. Reinstalling the game, updating the launcher or verifying files integrity didn’t seem to solve the problem, but some players figured out a workaround.

#1 It turns out that you can easily solve the problem. To get around this problem locate your game folder Victoria (usually it’s in the C:\Program Files (x86)\Steam\steamapps\common\), then look for Binaries folder, and inside you’ll find the Victoria.exe file. Also make sure that your antivirus program is not preventing the launcher from running. To prevent this from happening, add the launcher and game to the exclusion list in your security program.

There are also another solutions but maybe a little more complicated than the first one.
#2 Open launcher-settings.json file that you can locate in Victoria 3- -> launcher folder. Then, change formatVersion value from 1.1 to 1. We would like to thank MatWax for this solution.

#3 Go to C:\Windows\SysWOW64 folder, copy dbghelp.dll file then pasted it in the Victoria 3 binary folder launch the game. We would like to thank Ne0!@y for this solution.