Lego Incredibles cheats are special codes that allow you to unlock secret characters. There are sadly only two of them in the game, but there’s no way to get them aside from this. These characters usually have the same abilities as the ones you unlock through the story, but they have different outfits and animations. If you want to know how to unlock secret characters in the game, scroll down for a list of Lego Incredibles cheat codes.

How to use Lego Incredibles cheats

Unlike some of the previous games, you won’t have to reach the hub to use the codes. Instead, you’ll be able to activate them right away. The hub is accessible pretty early on, but it’s nice when you don’t have to wait. Open up the menu, and look towards the bottom. You should see an option called Enter Code. Select this and you’ll get the chance to enter a cheat (no scrolling, either – it lets you input the letters and numbers on the virtual keyboard). Once you activate the code, the game will tell you which character you’ve unlocked. 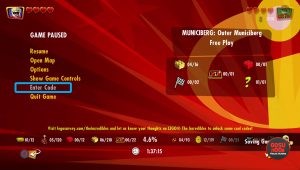 Here is a list of all the characters you can obtain this way, and the codes that will unlock them:

Apart from these, there are also red brick cheats. They are a bit different, as they’re obtained through the game. You need to collect certain red bricks – well hidden collectibles – which grant you special powers, like an increased number of studs. When you have them, you will have to activate them at a certain place in the hub – it’s usually a computer of some sort. They influence the abilities of your characters and the difficulty of the game.