Madden 23 solo battles not working is just one of many major issues plaguing the NFL game since its release in August. The latest edition of the popular American football video game has been heavily criticized over countless bugs and issues troubling players. Probably the most glaring issue is the fact that solo battles are still not working. So, how to fix the solo battles not working error in Madden 23? And can it be fixed at all? Let’s find out. 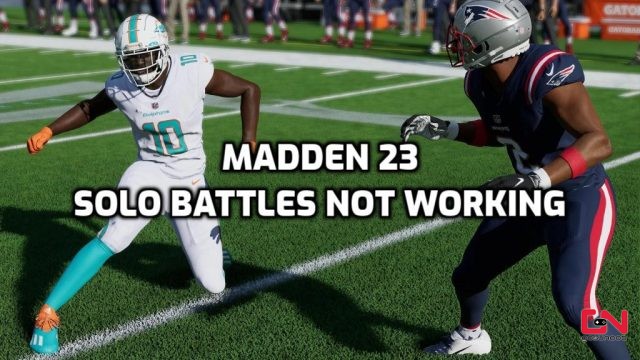 Let’s not beat around the bush here. If you were hoping to find a fix for solo battles, at the moment there’s no such thing. Unfortunately, the issue is too big to be bypassed with some temporary measures. When you receive the “Our Servers cannot process your request at this moment” error, it’s because the problem is server-related, and not on your side. It has been a month and a half since the release of the game, and this frustrating problem still persists.

Our only hope currently is for EA Sports to finally fix the solo battles not working problem. Luckily, there are some signs that indicate that the issue might be fixed in the October update. The official EA Help Twitter account states that they are well aware of the issue of the solo battles in MUT 23.

“Hello there, Ólafur. I appreciate you asking about Madden NFL 23 and solo battles not working as expected. Yes, we are aware of and looking into an issue with the mode currently. For now, please keep an eye here,” they wrote earlier this month. So, there you have it, for now, our only hope for the Madden 23 solo battles not working issue fix is the upcoming October update. We will make sure to update the article as soon as we have more information.

NEXT POSTOverwatch 2 Crosshair, How to Change & Best Settings