Scorpion chests are one type of loot container in Mortal Kombat 11. You’ll find them in the Krypt, and in order to open them, you’ll first need to find a flaming skull, pull it with Scorpion’s Spear, then pay 100 hearts. Finding these fire chests is not much of a challenge, but getting to the skull can be quite difficult. That’s why we’ve written this MK11 scorpion fire chest locations & how to open them guide.

If you’re short on hearts and want to know what’s inside each of these chests before you open them, check out our heart chest loot guide.

The first scorpion chest is in the Courtyard (-1841,-7738), on the other side of the wall with the statues, the one near the Warrior Shrine. The flaming skull is on one of the statues, but it’s invisible. You’ll need to use Kenshi’s Blindfold. If you can’t see it, just look for the prompt to use the spear instead – it’ll show up even if the skull is out of the blindfold’s range. 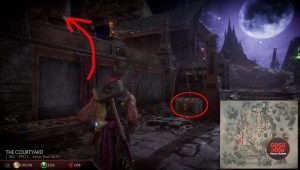 The chest in the Dead Woods (7111,-3899) is easy to find – it’s on the main path. The flaming skull is a bit further away. Keep following the road and head right. Cross the bridge and look for it under the roof of the gazebo.

The fire chest in the Gardens (2500,3700) is in the gazebo. The flaming skull is somewhat hidden, though. Head north and take a left the first chance you get. You’ll end up in the Vault. Before you enter the building, check out the trees on the right. You’ll find the skull hanging from a branch.

The chest in the Lower Courtyard (-6581,-5106) is at the end of a wooden walkway overlooking the Lower Pit. You can see the skull from there, on the terrace in the distance. In order to reach it, you’ll have to solve the wheel puzzle in the Kytinn hive first.

The chest in Shang Tsung’s Throne Room (12013,324) is right next to the throne. You’ll need to open 10 head chests at the Warrior’s Shrine in order to gain access to this place. The skull is in the Treasure Cache – follow the stairs on the right into the next chamber, and you’ll see it hanging off the ceiling.

The chest in Goro’s Lair (2634,-8226) is past the One Being door. Go past the first round of fire traps and look to the left. The skull is nearby, at the end of the corridor. 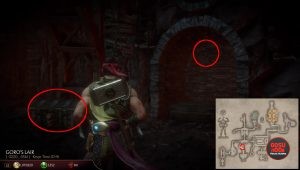 The chest in Goro’s Dining Hall (-807,-88) is right next to the entrance. To get to the skull, you’ll have to climb to the upper floor and behind the wall with the two big stone skulls. If you look through the tiny opening above the corridor, you’ll see the skull between the beams there.

The scorpion chest in the Lower Pit (-8914,-3352) is near Ermac’s body. The skull, on the other hand, is on the far east side of the area, hanging from the last big spire.

You’ll find the chest in the Kytinn Hive as soon as you enter it from Goro’s Lair. It’s on the right. The skull is in one of the farther chambers, past the Carcass of the Kytinn Queen. Look to the left, in the shaft with the light.

The chest in Goro’s Fortress (9468,3757) is on the second platform to the left. The skull can be found on the east side of the second central pillar.

NEXT POSTMortal Kombat 11 How to Get ??? Skins