The Missions in Uncharted Space content update for Disney Dreamlight Valley is here, and it comes packed with new content. Of course, the two biggest stars are Buzz Lightyear and Woody, the main characters from Toy Story. However, not everything in this update is about them. There’s also the “Mystery of the Stolen Socks” quest with Donald Duck. What is this “Slimy Stocking” item, and how to complete this questline? Let’s find out. 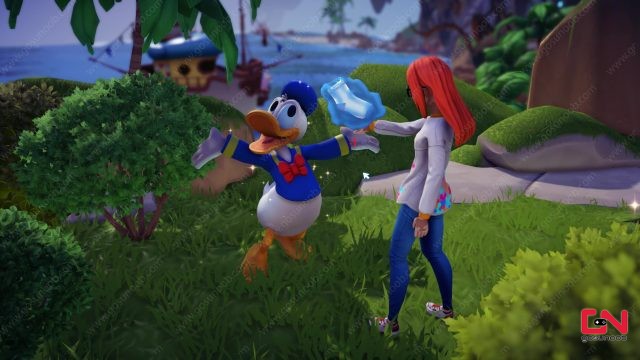 Where to find socks in Disney Dreamlight Valley

If you visit Dazzle Beach after the update, you’ll spot a mysterious item called “Slimy Stocking”. Pick it up, and you’ll start the “Mystery of the Stolen Socks” quest line. The description reads: “You found a stocking with the initials “DD” sewn into the lining”. The quest will immediately direct you to talk with Donald Duck, there’s no mystery here to whom the wet socks belong.

Find Donald and give him the Slimy Stocking, upon which he’ll notice they have “bite marks and spit all over it”. He’ll claim they “must’ve been stolen” and ask you to help him find the thief. Apparently, all kinds of items have been stolen from his house. And according to him, these all have to do with “funny lights streaking across the sky” and a “sock-stealing UFO”.

From here, the next step is to search around Donald’s house for clues. Thus, you should head to his house, remove the trash and look for a clue. That clue will be the “Strange Device” item. Give the Strange alien device to Donald. He will triumphantly proclaim that aliens indeed stole his socks. And when he spills some drool from the sock on it, it will say, “DNA MATCH. Authorization 33% complete”.

Now, all that has left is to find a couple more socks with DNA samples, and we will find who’s our alien thief! We have a pretty good idea who this thief might be.

The next sock will have a “G” sewn into it. And you guess it right, it belongs to Goofy. Head to his place, give him the sock and then look around his house for another clue about these aliens. You’ll eventually find a patch of blue fur “from an unknown creature”. Finally, bring the Blue Fur to Donald to proceed with the quest.

The third and final sock can be found in the Forest of Valor, by the rock near the stream. Check out our map and image below for the exact location. This will start the final part of the quest – “Built to Destroy”. Talk to Mickey, Kristoff and Merlin to find out who’s the owner of this knitted sock. You’ll eventually learn that it belongs to Merlin. He’ll direct you to search Merlin’s library for more clues. There, you’ll find a Mysterious Claw, the final piece of the puzzle!

Bring it to Donald; he’ll analyze it, and you’ll learn that the strange device is actually a beacon. Put it down on Skull Rock off Dazzle Beach, and you will unlock Stitch!