The GTA Trilogy is officially out. Comprised of GTA III, Vice City, and San Andreas, all three games have gotten the remastered treatment. Of course, each game can still be played separately and all of them have their own story, characters, and gameplay systems. For example, one of the things you will be able to do in GTA San Andreas involves recruiting gang members to your cause. If you are unsure about how this is done, our Recruit Gang Members GTA San Andreas Definitive Edition guide is here to help you out so that you can quickly build up your gang. 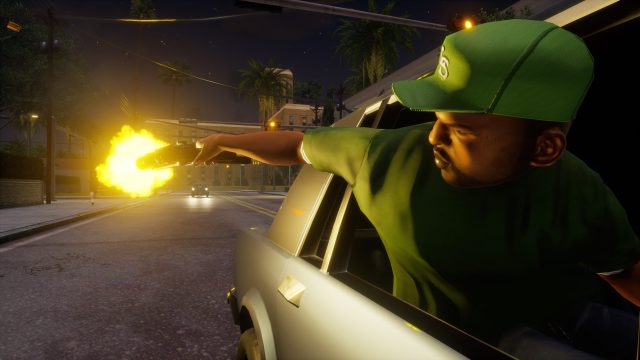 To recruit first gang members, look around the general Grove Street area. Here, you will often come across members of the Grove Street Families gang. You will be able to easily recognize them, since they are dressed all in green. To get them to join you, approach them and then aim directly at one of them and press the Recruit button. Don’t confuse this with the Fire button, as this will, naturally, make them aggressive towards you. After that, the member you pointed at should join your gang. Of course, it’s a bit more involved and complicated than this.

The number of gang members you are able to recruit to your gang all depends on how high your Respect Level is. With 80% Respect, you can have 7 of them, 60% – 6 members, 40% – 5, 20% – 4, 10% – 3, 1% – 2 of them. Even if you have no Respect at all, you will always be able to recruit at least one gang member to your side. To increase your Respect, you will need to play the game and do things such as completing missions, gaining new territory, killing rivals, and so on. Gang members can be useful during firefights, but mostly so that all the enemy fire won’t be concentrated solely on you. Their AI isn’t the best and they will rarely be of much assistance for anything more than that, so be prepared to get your hands dirty even though you are traveling with an entire posse.