Companion romances have been a staple of computer role-playing games ever since Baldur’s Gate 2, and Pathfinder: Wrath of the Righteous is no different. Just like Pathfinder: Kingmaker, in Pathfinder WotR, you will also be able to build special romantic relationships with several characters. In total, there are six companions who are romanceable, as well as an additional special (and prominent) NPC. Companions have their own sexual preferences, which is another thing you will have to keep in mind when creating your main character. In this Romances Pathfinder Wrath of the Righteous guide, we will take a look at all romance options in the game and tell you which companions can be romanced by which characters. 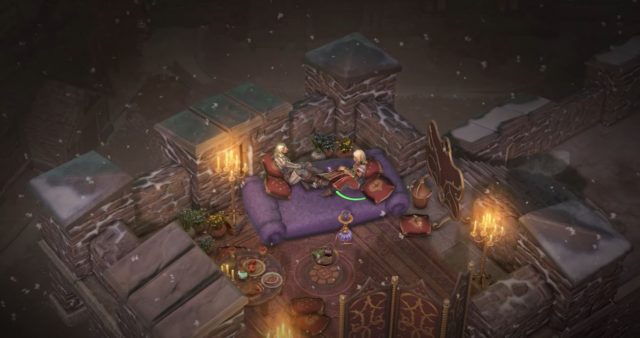 As we said, there are six companions which you will be able to build a romantic relationship with. These are: Lann, Wenduag, Camellia, Daeran, Arueshalae, and Sosiel. Let’s take a look at all of them and who they are attracted to. First we have Lann. He is a Lawful Neutral Zen Archer (a Monk archetype specializing in ranged combat) and will romance a female Main Character. Next up is Wenduag. Lann and Wenduag are mutually exclusive companions, and by choosing her, you will get access to a Neutral Evil Fighter who is romanceable by both male and female Main Characters.

Camelia is a Half-Elf Spirit Hunter Shaman. She is the second companion you will meet in the game and prefers men. The Neutral Evil Aasimar Oracle Daeran is bisexual and his romance is open to all Main Characters. Likewise, Arueshalae, the Chaotic Neutral Ascended Succubus Espionage Expert Ranger also swings both ways. Finally, we have Sosiel. This kindhearted Neutral Good cleric of Shelyn is an option for gay males.

There is also another special NPC romance. As part of a Kickstarter stretch goal, Queen Galfrey, the ageless commander of the Crusade, is another character which you can romance if you choose to. Like Wenduag, Arueshalae, and Daeran, she is also attracted to both males and females. And those are all the Romances Pathfinder Wrath of the Righteous. If more companions get added in subsequent DLCs, odds are good that they, too, will be romanceable.