Death From Below is the second chapter in Serious Sam 4. There are four secrets in it, containing a gadget, some health, ammo and armor. They’re easy to miss, especially if you get carried away by the action. Even when you know where they are, some of them are difficult to reach. Getting them all will increase your score at the end of the level – if you want that, this guide will show you all Serious Sam 4 level 2 secrets – Death from Below secret locations.

#1 Secret depot in Death From Below

The first secret is in the dead end with the black van. It’s a depot with health, ammo, armor and a L.I.F.E vial. Climb the van, then jump on the little ledge on the left. Climb the balcony, then the little transformer, which will allow you to jump onto the AC unit. From there, you can jump onto the beam, then the windowsill. Save before that last one – you’re probably going to miss at least once. From there, you can jump to the open window and crawl inside. 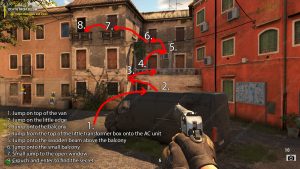 #2 Secret armor in Death From Below

The next secret comes right before you reach the burning truck and trigger a cutscene. On your left, you’ll notice what looks like a kiosk with shutters pulled down. If you go behind it, you can climb onto the grey telephone box, then jump onto the roof of the kiosk. You’ll find the armor there.

This secret is extremely close to the first one, and it can also be found before the cutscene at the burning truck. There will be two cars by the building on your right, as you watch the fire. Jump onto the roof of one, then jump onto the air conditioning unit on the wall. This will allow you to reach the balcony, which is where the secret health is hidden. 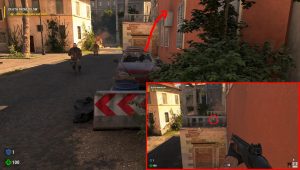 #4 Secret ammo depot in chapter 2 – Death From Below

The secret ammo depot can be found after you encounter the squad being lectured by their sergeant. Deal with them, then climb onto the crates by the fence. Jump onto one of the fence posts, then up on the balcony. You’ll find the ammunition there.

The final secret is a gadget. You need to follow the objectives of the We Can Be Heroes side mission in order to complete it. After the final battle on the big rooftop, look towards the red building that connects to it. Approach the parapet on the right and look across the street – you’ll see another, smaller balcony. You need to jump onto it to get the secret gadget – make sure you have a running start. 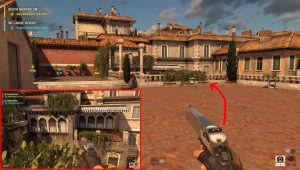 This one isn’t hard to reach, but getting the idea to even try is another matter. When you reach the soccer field, look for a tiny lot with a mesh fence, between the garages. There’s a soccer ball there. Push it into either goal by shooting it. A bunch of fireworks will go off, and a rain of health kits will shower the field. 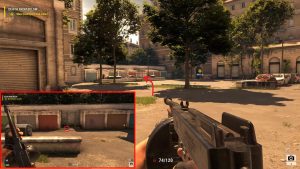 #7 Secret rooftop depot – Death From Below

The last one is a secret depot. You can find it as soon as you reach the rooftops. Follow the path left, and turn around as soon as you pass teh first building. Jump onto the windowsill on the left, then the ledge on the right. This will allow you to climb onto the roof, and then the long, narrow terrace. Follow it to the end, jump over the parapet and look left. You’ll see a balcony on the building you came from, filled with armor, ammo and health kits.