XP coins in Fortnite allow you to earn a lot of experience points in a short time. A handful of them, of varying value, are available each week after you’ve completed your challenges. They’re like a dessert you earn after diligently eating your greens. In week 5 of season 4, there’s one gold coin, three purple ones and several blue and green ones. If you’re wondering where to find them, this guide will show you Fortnite Week 5 XP coin locations.

You can find the gold coin inside the Trask transport truck – the one you’ve already visited in order to complete the Wolverine challenge this week. It’s in the northwestern corner of the map, in the tiny settlement southeast of the lighthouse.

The first purple coin can be found in Coral Castle, atop a coral tree in the northwest of the area. There’s another one in the middle of the map, on the hill between the Sentinel Graveyard and Lazy Lake.

The last one is in the forest by the river between Doom’s Domain and Salty Springs. Once you reach the bridge, follow the northern bank to the east until you find it. 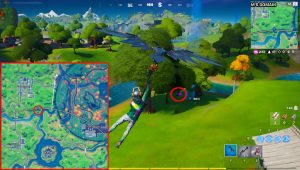 The first one is hidden away at Craggy Cliffs. It’s in the factory on the eastern edge of the city. Once you’re inside, start destroying the cardboard boxes on the conveyor belt. The coin will be in one of them.

There’s also one in Retail Row. Approach from the east, then head into the tiny room between the two back doors that lead into the stores. You’ll find a TV there, with a gnome next to it. Smash the gnome to get the coin. 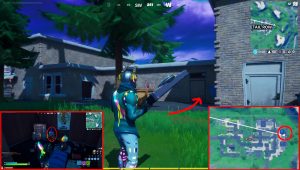 You can get a green XP coin from a hillock between Doom’s Domain and Stark Industries, near the edge of the latter’s territory. There’s also one at the Stack Shack, the fishing cabin on the rock in the ocean west of Holly Hedges.

The other two are equally easy to find. One is under the red truck on the tip of the peninsula at Dirty Docks. The other is on the stump of a broken tree in the Weeping Woods, by the river on the northern edge of the forest.