LEDX Skin Transilluminator is an item in Escape From Tarkov. It’s a piece of medical equipment, designed to pinpoint the locations of veins under the skin. As such, you’ll need it for the Private Clinic quest, but also if you want to upgrade the medstation at your hideout to level three. There’s a bunch of them of them in the Labs and Shoreline maps, and only a few on Interchange and Reserve. If you don’t have time to look them up yourself, we’re going to show you a bunch of Escape From Tarkov LEDX Skin Transilluminator Locations after patch 0.12.3.

Keep in mind that the LEDX Skin Transilluminator isn’t a guaranteed spawn. Since it won’t show up in each of the spots every time, you might have to look for it in several different places.

The best place to look for these is the Labs map. You can get several transilluminators there, without having to spend money or items to get them. You can find three in the orange dome in the middle of the main working area on the first level – the big room (011 on the map). Two spawn points are on top of barrels to the left and right of the entrance, while the third is on the pallet that’s loaded onto the forklift. 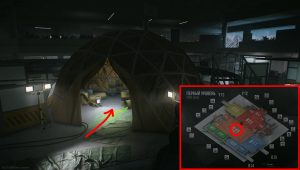 Another one can be found in the office above the server room, on the second floor (B21 on the map). Go up the stairs from the orange dome and head into the server room. Follow the catwalk into the office and head right. There’s a laptop on the far end of the row of desks, and that’s where the transilluminator should be.

While you’re on the second floor, go to the big white and blue screen showing a mountain peak in 021 (the upper floor of the room with the orange dome). Go into the hallway to the left of it, and look right. You’ll see the laboratory entrance (G22), locked with a keypad. If you have one, you can look for a transilluminator in a round metal box inside.

The last one’s on the first floor. Starting from the orange dome, go past the terrarium with the green background image. Go into the infirmary tent and make a right at the hazmat suits. There’s a lab in the room at the far end of the right side. Go inside and look to the right. If you have a keycard, you can enter the locked part of the lab and find a transilluminator on the metal pushcart in the last room.

Where to find LEDX Skin Transilluminator on Interchange

There’s only one transilluminator on the Interchange map, and it’s within the Ultra shopping mall. When you go through the main entrance, climb the first set of stairs and keep going forward until you reach a small square. Go left, and at the next intersection, look at the storefront on your left. It’s an EMERCOM medical care unit – the item is inside, but you’ll need a key to get in. If you haven’t found one looting the jackets strewn across the map, you can buy it from the market.

There’s one spawn on the Reserve map as well. It’s in the hospital. Go to the big square with the helicopter, then head towards the train tracks. Enter the building on the left, and go towards the hole in the wall. Climb the stairs on your right, then turn left. Go past the bathroom, and you’ll encounter a locked door. Behind it is the medical cabinet, which is where the spawn is. You’ll need a key for the door – you can get one on the market, if all else fails.

We’re going to keep playing, and we’ll update the guide with new spawn locations as we discover them.

NEXT POSTDoom Eternal Battlemode Multiplayer Shown Off in New Video