V Rising became a surprise hit on release. Described as Valheim meets Dracula, V Rising combines classic survival game gameplay with vampiric powers. As such, the game will allow you to do the usual survival game elements such as collecting resources and crafting new gear, but will also put a supernatural, vampire spin on them. For example, in order to unlock your advanced powers and learn how to make structures, you will need to take on the V Blood Carriers. These are powerful bosses and defeating them will get you equally powerful rewards. Take Azariel The Sunbringer as an example. Defeating him gets you the Power Surge ability, as well as the recipe for Gold Ingots. Of course, you need to first find the location of Azariel The Sunbringer in V Rising, and defeat him. We’ll show you how. 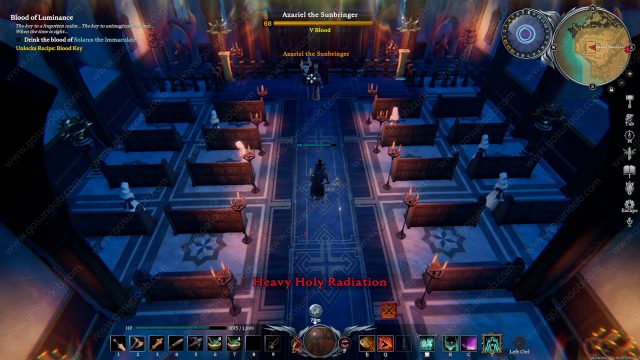 Where to Find Azariel The Sunbringer in V Rising

Azariel The Sunbringer can be found in Brighthaven Cathedral, which is located in the western end of Silverlight Hills. We have marked this location in the screenshot below. If you want a simpler way of getting there, first interact with your Blood Altar. Scroll down until you find Azariel The Sunbringer and then use the Track Blood option which will lead you to him.

However, before you go and fight him, there are a couple of things you should be aware of. The first of these is that he is a powerful Holy Damage dealing boss. This is, naturally, really deadly to Vampires. To have any chance of defeating him, you will need to have a couple of Holy Resistance Flasks with you. To craft these, you will need to defeat Willfred the Werewolf Chief. Though, even when you have enough of these Holy Resistance Flasks, you should still be careful, as Azariel The Sunbringer is a Level 68 boss. Take him on only when you have mastered your abilities and crafted great gear.