The first three episodes of Arcane have recently started streaming on Netflix. This animated TV show is set in the League of Legends universe. Featuring positively spectacular animation, the show has garnered very positive reviews so far and has been well-received by both critics and fans. Besides the animation itself, viewers have been drawn in by a compelling cast of characters. We’ve already written about Mylo, one of the members of Vi’s gang, and now it’s time to take a similar look at their parental figure Vander. Our Vander Arcane League of Legends article will tell you all that we currently know about this enigmatic character and his relationships with the rest of the cast. Of course, we shouldn’t have to point out that there will be spoilers abound. 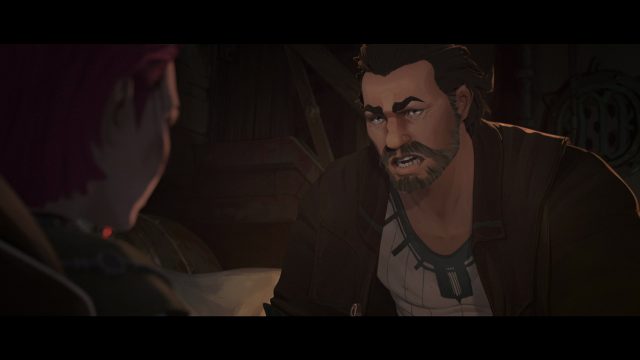 Who is Vander From Arcane LoL

One of the first characters we will meet in the show, Vander is visible right from the start. He is seen protecting little Vi and Powder in the opening flashback. Later on, we can see him in “The Last Drop” pub, a seedy establishment that he is the owner of. He is obviously something of a community leader, with people looking to him for guidance and protection. Another important factor when it comes to Vander is his relationship with Vi and Powder. Both girls consider him an important figure in their lives. Vi’s own fighting style appears to emulate his own, as he is also proficient in boxing and using power gloves.

Similarly to Mylo, Vander also appears to meet a grizzly end during episode 3. However, there are a couple of hints that seem to indicate this isn’t necessarily the case. Many are speculating that Vander could actually end up being Warwick – one of the Champions from League of Legends. Vander is voiced by French actor and director Jean-Benoît Blanc.