The “Shader Cache Build process Exit Code 1” Error in Warhammer 40,000 Darktide is a problem many players have at the start of the beta. The Darktide Pre-order Beta is now live for everyone who has prepurchased the game. This two-week early access period will allow everyone who buys the game right now to experience it early ahead of its launch later this month. However, they will also experience some issues which should hopefully be fixed before the full release. Read on to learn how to fix the “Something went wrong in the Shader Cache Builder Process Exit Code 1” error in Warhammer 40,000 Darktide. 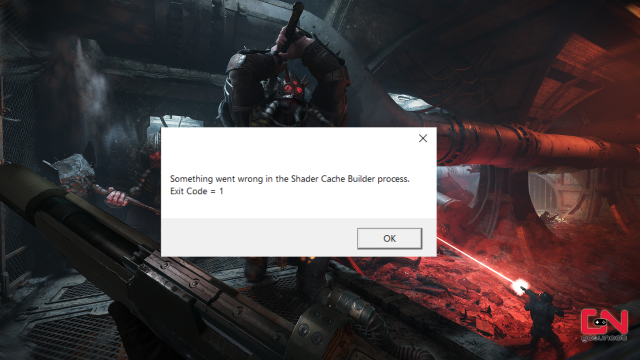 The issue with the Shader Cache Builder Process is not a new one. It has appeared before during the closed beta testing. And seems that players are suffering from it in the pre-order beta as well. For some reason, the game fails to properly build a Shader Cache during launch, which is a common practice. This results in an error which freezes your PC and forces you to hard restart it. Definitely not a pleasant thing to do. Whenever a game does something like that, it can endanger your hardware or even make permanent damage. So, is there a solution? For now, we’ve found only one solution for the “Something went wrong in the Shader Cache Builder Process Exit Code 1” error.

A user from the Darktide Discord server, which goes by the name Morbtide, explains that this could be fixed by deleting the developers (Fatshark) roaming folder from your PC. The folder is located here – C:\Users\yourusername\AppData\Roaming – (just make sure to replace “yourusername” with your actual Windows username. Once you find the “Fatshark” folder there, delete it, and restart your PC.

After that, start Steam and launch Darktide. Steam should now recreate the “Fatshark” folder and redownload the necessary files. This should hopefully fix the issue. For now, that’s the only solution that we know of for this bug. If it doesn’t work for you, you should contact the official support. Do you know any other workarounds? Share them with us in the comments!

NEXT POSTElectric Drill Locations, DMZ Based

How to Buy Multiple Packs With Gold Hearthstone

Not sure how to buy multiple packs simultaneously with Gold in Hearthstone? We’ve got you…