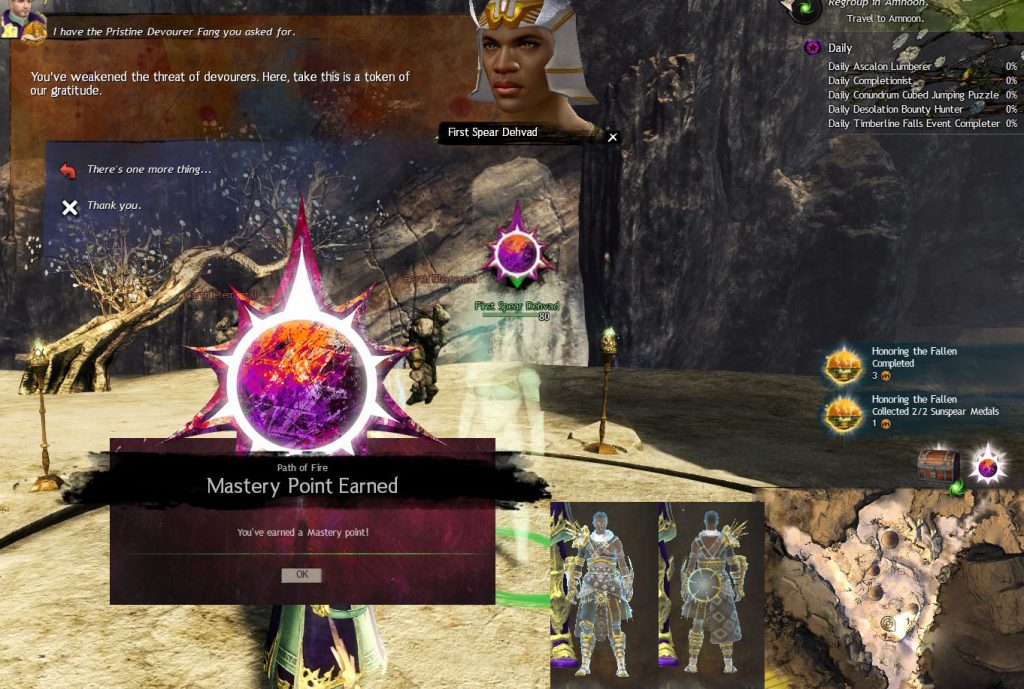 Sandstrewn Shrine Mastery in The Darklands – Where to find First Spear Dehvad?

The Sandstrewn Shrine PoI mastery is found in the Darklands, in the western area of the Desolation map. If you’ve discovered this area, you probably already have The Darklands Waypoint. From it, go toward the northwest into the “snowy” area. At the map location of the mastery point, you’ll find a plateau, with several earth elementals and a central, circular platform with eight torches.To get the mastery point at Sandstrewn Shrine in The Darklands, you’ll need to step on the central, circular platform and do a /bow emote. This will summon the First Spear Dehvad NPC. He will send you on a task to find three Pristine items. Once you have all three of them, you can give them all to First Spear Dehvad, in exchange for the Honoring the Fallen achievement, and give your bags a slight break from the cluster of things you keep in them.

How to Get Pristine Awakened Emblem

Pristine Awakened Emblem drops from Awaken enemies in the Desolation map. This includes all enemies that have “Awakened” in their name. You can find them in the central Desolation area, in the region called The Scourgeway. There is the Scourgeway Waypoint you can use to teleport to. Just west, north and south from it, you’ll find three groups of Awakened enemies.The Pristine Awakened Emblem’s purpose is to serve as a collectible item for the Honoring the Fallen achievement. Once you have it, you can bring it to First Spear Dehvad, and he will accept it, removing it from your inventory.

The Pristine Skree Harpy Feather drops from the Desolation Harpies. A rather large group of them can be found in the Sulfur Quarry, in the northwestern part of the Desolation. This is an area with a lot of yellow pools and scenery. The feather usually drops from the first harpy you kill, and it was a Sulfur-Crazed Harpy Predator for me.The Pristine Skree Harpy Feather item is needed as proof of valor against the Skree harpies. Take this trophy with the other two to First Spear Dehvad, and you’ll get the mastery point and a miniature.

The Pristine Devourer Fang item drops from the devourer enemies in the Desolation area. You can find these devourers in the southeastern area, just southwest from the Lair of the Forgotten and its Waypoint. There is a large field here, marked as Waywayrd Watch. Groups of weaker Whiptail Devourer Hatchlings, and a stronger Veteran Lashtail Devourers roams the area.The Pristine Devourer Fang serves for the Honoring the Fallen achievement. Take it to First Spear Dehvad, marked on the map above in the guide, and you’ll get rid of it from your inventory.