Team GWENT has announced Kill The Servers 2; the second event designed to test the limits of their servers. It begins on September 27th, 8PM CEST and end at 12AM CEST.
▼Article Continues Below▼
The announcement is teasing players with new decks and new factions. “Puny humans have tried to overpower us, but failed”, said the Gwent Server Cluster. He then added that “the decisive battle” will happen on Tuesday. 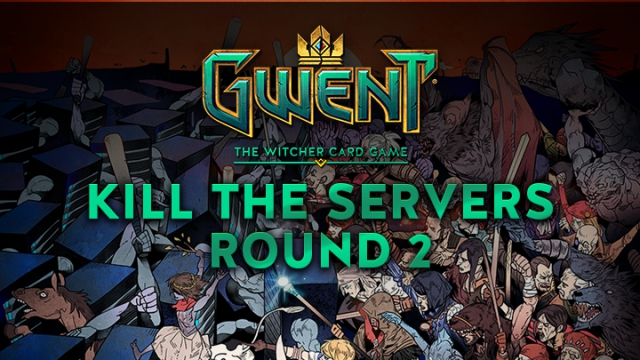 After the great success of the first Kill The Servers event, Team GWENT is back for more. In the announcement, the Gwent Server Cluster openly challenges the players. General Cluster had this to say: “Next time we meet, we plan on taking prisoners and overclocking them without using sufficient heat dispersal. Maybe we’ll gather them in one place and ask to run below 60 FPS.” It’s safe to say that players won’t take this kind of provocation without retaliation. The announcement then quotes a representative of the human army that teases: “We’re preparing entirely new decks and factions… the servers must die!”

The first Kill The Servers event did an amazing job at teasing the full game experience. It featured only two decks and had many features from the game locked off. Players were unable to build their decks or to access the store. It also had some balancing issues to fix. Players complained that the Monster deck had some unfair advantages over the Northern Realms deck. Kill The Servers 2 promises to open more features and more decks, giving us a better idea of what the final game will be like.