Gwent’s Kill The Servers 2 Stress Test has come and gone. The four-hour event pitted players against Gwent’s server cluster in a bloody battle to the death. While us humans did put up quite a fight, the servers were once again victorious. Even the backup in the form of extra decks and factions wasn’t enough. The odd hiccup notwithstanding, the servers managed to handle the onslaught of players and kept the experience smooth and exciting. It delivered on it’s promise of new decks and new factions, though some features of the final game did remain locked off. 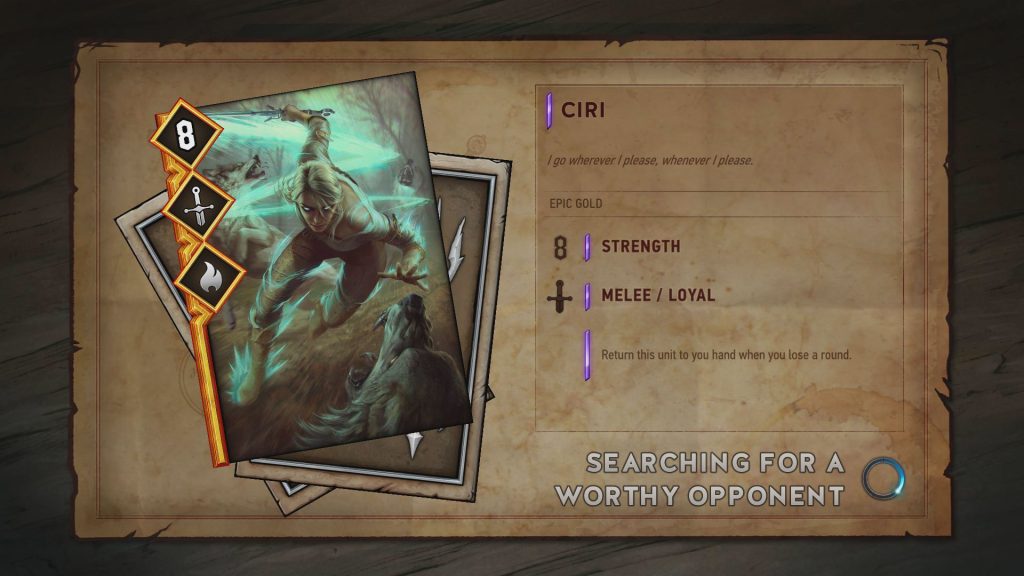 Kill The Servers 2 was everything we hoped it would be. Two new factions are added: the Scoia’Tael and the Skellige. Players still had to use pre-made decks, as deckbuilding is still unavailable, but that didn’t lessen the overall experience. The in-game mechanics didn’t change much. The cards are still divided into Bronze, Silver and Gold tiers. Effect cards work on them differently depending on the card tier. Players still get to draw two cards from the deck after the first round, and one more after the second. Balancing issues have been addressed. The Northern Realm and The Monsters deck went through some changes to level the playing field. There are also some changes in comparison to Gwent from Witcher 3, which serve to make the standalone game more engaging and accessible.

While the event went mostly without a hitch, it did hit a few bumps. Some players had issues with connectivity and glitches, such as an infinite loading screen bug or finding a free server to play on. There is no doubt that Team GWENT will fix these problems before they launch the closed beta on October 25th. Newcomers also noted that keeping the tutorial option locked wasn’t a good move. Fair enough; but let’s be honest, Kill The Servers events are for hardcore fans only.

Speaking of, rumors are floating around about whether there will be wipes after the closed Beta. While KTS and KTS 2 didn’t store any game data, players are wondering if the same will happen after they finish Beta testing. Some say that there will be a wipe of progress, but that participants will receive some kind of reward, like in Hearthstone. Others believe that there will be no wipe, and that gameplay progress will carry over from the Beta to the full game. Nothing has yet been confirmed.

Gosunoob joined the human forces in our attempt to bring an end to the server tyranny. You can watch our three-hour stream of the event below.

PREVIOUS POSTIsenfyre Token – How to use it in Destiny: Rise of Iron

NEXT POSTOutbreak Prime Exotic Pulse Rifle – How to get it in Destiny: Rise of Iron