The long-awaited single-player campaign for Halo Infinite is finally here! While players have had the option to play the free multiplayer portion of the game for the last couple of weeks, its paid single-player campaign is what many fans of the original Halo games were really waiting for. Unfortunately, many players are having issues with getting the game to download, as the option to download the Campaign is not showing for them. If you are one of the players that have experienced this issue, our How to Download Campaign, Halo Infinite Campaign Not Working guide is here to help you download the Campaign on the Xbox and Game Pass PC. 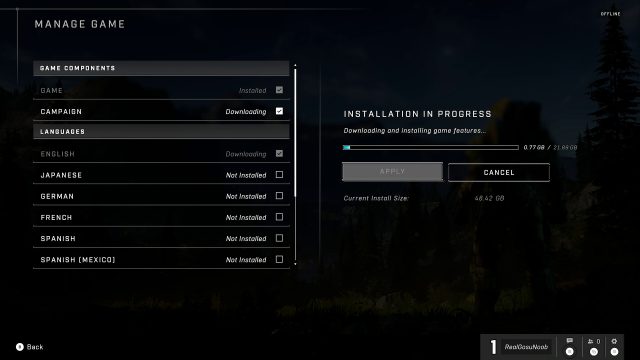 Now, since we have this game purchased and installed on the Xbox Series X, we have to point out that this guide will only cover that console and the Gamepass PC, and not the Steam Edition of the game. When we test out how to do this for the PC as well, we will update this guide to reflect that. With that said, let’s see how to download the Campaign on the Xbox. If you already have the multiplayer portion of the game installed, the first thing that you will be greeted with when you try to start the game will be a 4 GB update. Download this and start the game. If the option to update the game isn’t showing, restart the console and it will show then.

Once you are in the game, you will see that there is a Campaign button on the Main Menu screen, but that it is grayed out. Click on it. This will bring up two tabs – Download and New Game. Click on the Download tab. Next, you will find yourselves in the Manage Game section. Under Game Components here, you will see “Game” and “Campaign”. What you need to do is to mark the Campaign and then select Apply on the screen to the right. This update is approximately 21.9 GB. A quick tip – it’s best if you turn off the game while it’s downloading, since the download is really slow while the game is working. After it downloads, you will then be able to play the Halo Infinite Campaign on your Xbox.

How to Download Halo Infinite Campaign on Game Pass PC

The process for downloading the Halo Infinite Campaign for the Game Pass PC is very similar. First, load up Halo Infinite. Then, select Campaign and download it from within the game. Once the download is complete, you can then play the single-player campaign.