During E3 2017, we found out that the first Horizon Zero Dawn DLC, called The Frozen Wilds, is coming in Fall 2017. Now, thanks to Guerrilla Games managing director Hermen Hulst, we got some more information regarding this DLC.

For starters, the DLC will take place in a new area, located on the other side of the northern mountain range. This is the territory of the Banuk tribe. They’ve been there for quite some time, trying to live side by side with the machines.

This means that the DLC will probably, at least partly, revolve around getting to know the Banuk and their lifestyle, culture and more. Just like before, we’ll do so through new challenges, quests and settlements. All this with the help of new weapons.

The Frozen Wilds is a new chapter in Aloy’s journey. This is a part of her nature, as she is one of the brave people who are willing to go into these new lands. The motive that takes her there are the stories about the new machine threat and the secrets that are buried in the far north. 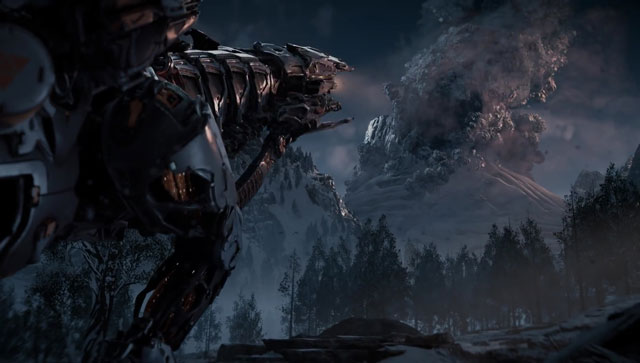 Motives behind making this DLC, according to Hermen Hulst, are simple. It is the desire to use the technology and tools they have from the main game to make something that will give more content to the players who had already completed everything there is to do.

If you are craving more details about The Frozen Wilds, be sure to check out the first Frozen Wilds DLC reveal trailer. This is where we can see Aloy and the Power Suit armor in the action. It is really interesting that this outfit finds its place in the cutscenes.