During the Crying Shame Quest in Immortals Fenyx Rising, you’ll have to breach three vaults in order to collect three Tears of Aphrodite. The vaults themselves are fairly challenging, but getting into them is even more difficult. Each of them has a puzzle that locks the entrance, and if you’re having trouble with them, this guide will show you how to enter Tears of Aphrodite vaults in Immortals Fenyx Rising.

How to enter cave vault – door with three locks

The first vault is in a cave. Once you glide down to the entrance, you’ll notice it’s blocked by a red barrier. There are three switches you need to press in order to open it. The first one can be reached by jumping into the hole on the right. You’ll see it on the platform farther down the hole once you drop.

To reach the second one, break the weak wall and go into the small room. Look through the bars on the right and pull the box towards you. Once it’s off the pressure plate, the door will open, allowing you to get to the switch. For the third one, you need to climb to the ledge above the second one. Stand on the pressure plate and shoot a guided arrow through the fire, then the crack in the wall, to light the brazier. This will activate the wind current – ride it up to the platform with the third switch.

The second vault is in a clearing guarded by boars. Once you defeat the creatures, all you have to do is destroy the statue with several well placed attacks in order to reveal the entrance. 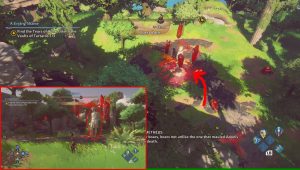 The third vault may seem daunting at first, but it’s actually pretty easy – you need three cabbages. Grab them, and place them on the empty pedestals in front of the entrance, and it’ll open up. You can find a cabbage on the roof of practically every house in the village next to the vault, so it should be no problem.