Before we proceed with the review, we must wholeheartedly commend Ubisoft for launching a completely new IP in a year as turbulent as this one. Many other big publishers are operating in “dispersed siege” mode, still trying to adapt to the challenges of working from home while avoiding sharing launch window with Cyberpunk 2077, which itself shifted several times this year alone. Offering something new in this chaotic climate is exceptionally brave and reminds us of the good old days when companies took that kind of risk all the time. 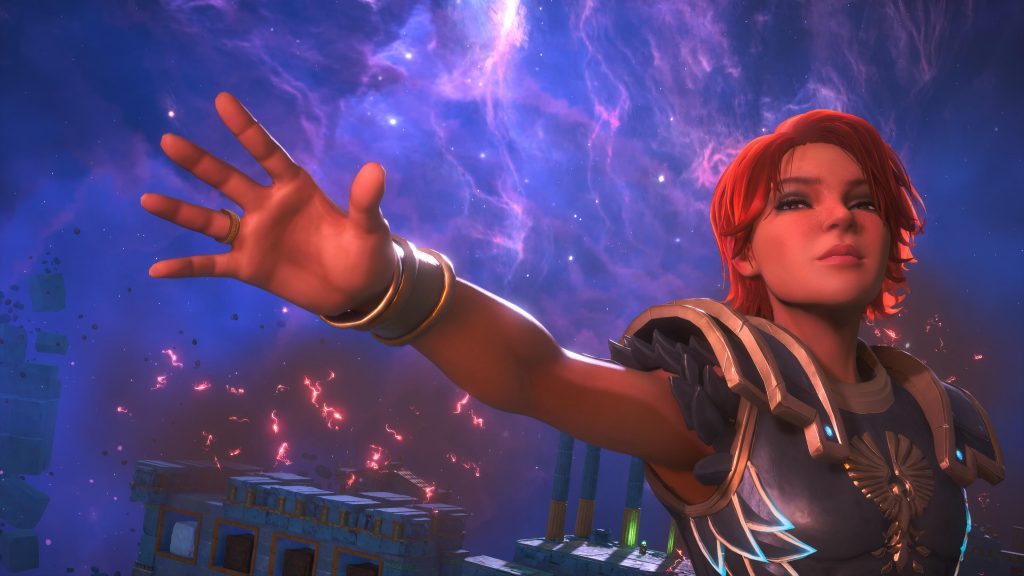 Immortals: Fenyx Rising, previously known as Gods and Monsters, is a Zelda-like open-world action-adventure RPG created by mixing facts and fiction from Greek mythology. They took the usual backdrop of bickering Olympian gods and put them in a Ragnarok-like situation: Typhon, son of Gaia and Tartarus, mighty Titan who once fought Zeus for the supremacy of the cosmos, broke free from his underground prison and exacted the terrible vengeance on the Pantheon. He took their powers, imprisoned them, and declared that their age is gone. Young Fenix, despite being a puny mortal, is the last hope of free Olympus. Assisted by less than helpful Hermes, he will wrestle with the corruption of the land and his or her inexperience while trying to right this great wrong. 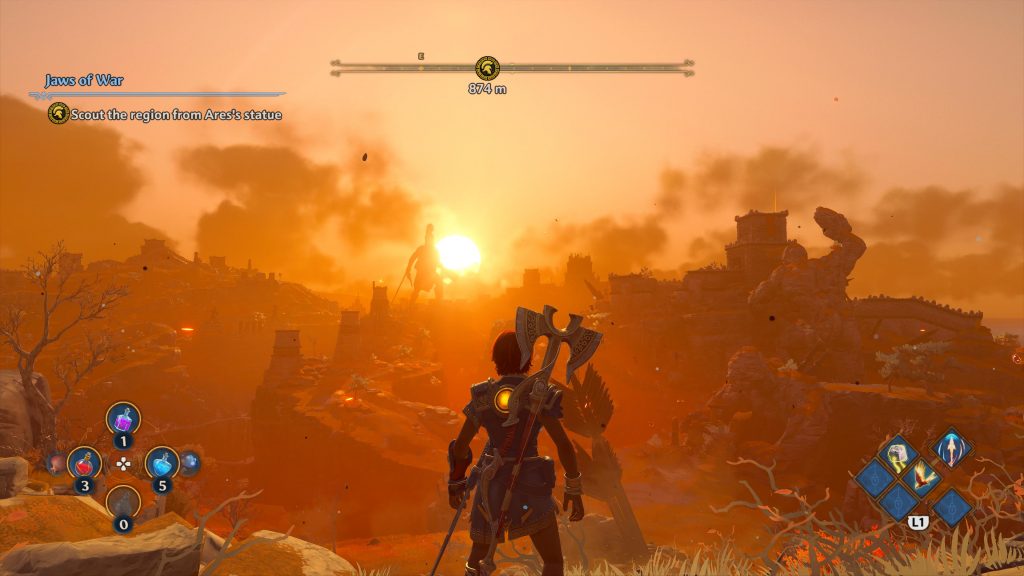 Although all this sounds mega-apocalyptic, the tone of the game is anything but. Immortals: Fenyx Rising is full of satire and light-hearted comedy dialogues and tropes which may trick you into stopping treating it seriously, a potentially grave mistake. This is a massive and challenging game, both in terms of content, puzzles, and combat, all capable of fully taxing your neurons, muscle memory, mental facilities and patience. Don’t judge the book by the cover. Don’t evaluate the game by sweet screenshots that promise casual joy and relaxed adventuring in the stylized landscape – this is not a casual, relaxing game by any stretch of that definition. 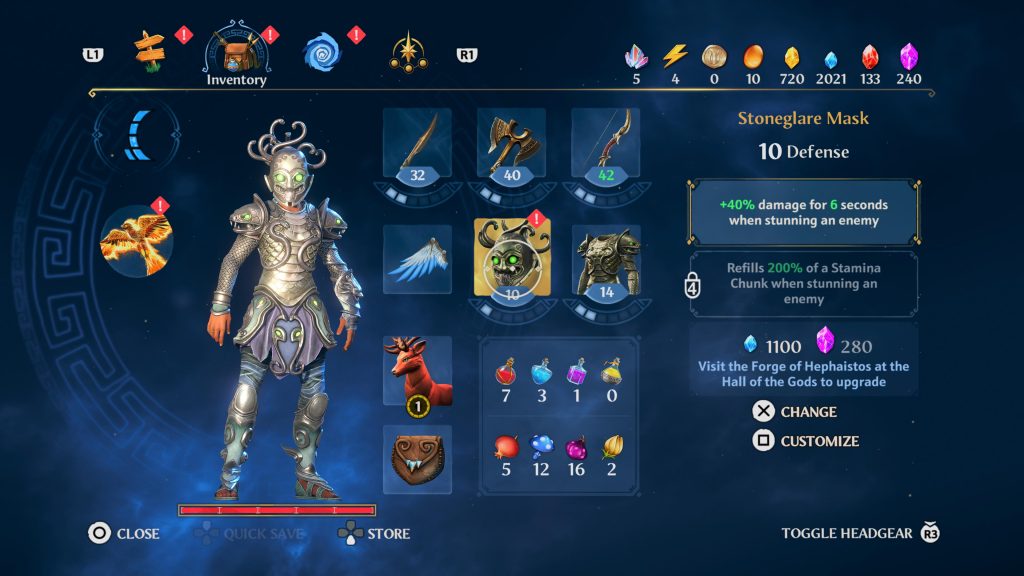 Immortals: Fenyx Rising starts with a lengthy prologue where you learn what’s what in relation to main gameplay systems, after which you get tossed into the big open world divided into several biomes, domains of different Greek gods. You will probably tackle beautiful Aphrodite first, taking the quest to rescue her from the curse of tree form and liberating her essence, which resides in the deep hellish rift. Besides the main quest, you will have the opportunity (necessity, really) to plow thru a myriad of optional content pieces, each offering the resources needed to evolve your kit and yourself for increasingly difficult challenges that lie ahead. 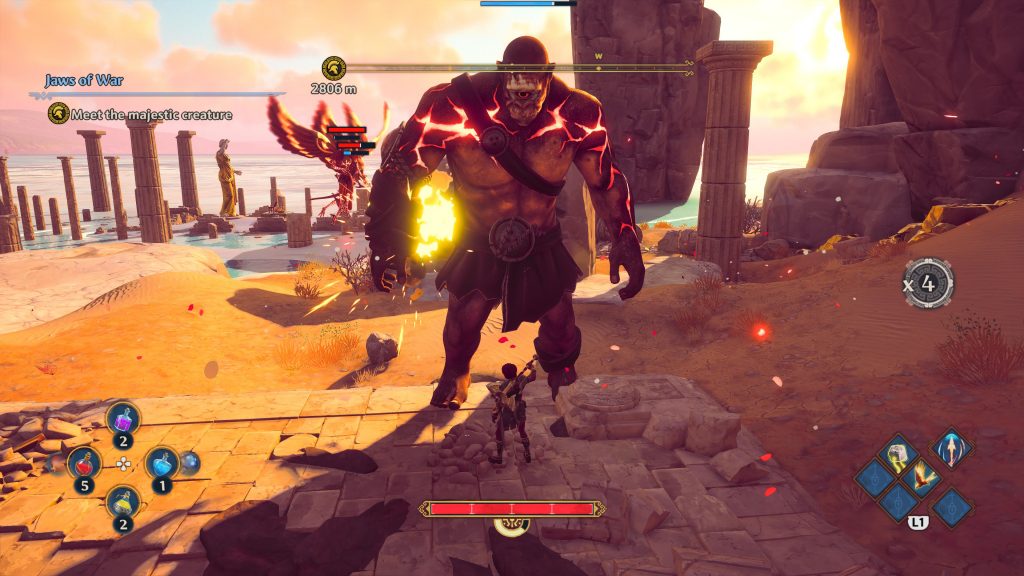 Those optional activities and resources they provide are abundant. Before you dive into clearing the map, you will need to manually scout every region for chests, rifts, ambrosia, and various puzzle challenges. This process is not automated, like syncing the landscape from scripted points in the Assassin’s Creed games. Instead, you will need to find any high ground, zoom in and try to spot and manually reveal the hot-spots on the terrain, assisted by the sound and vibration clues from the gamepad (we played the game on PlayStation 5, please don’t hate us). Once you make several dozen circles on the horizon and everything stops vibrating, you can start with the long process of clearing the map, one marker at a time. 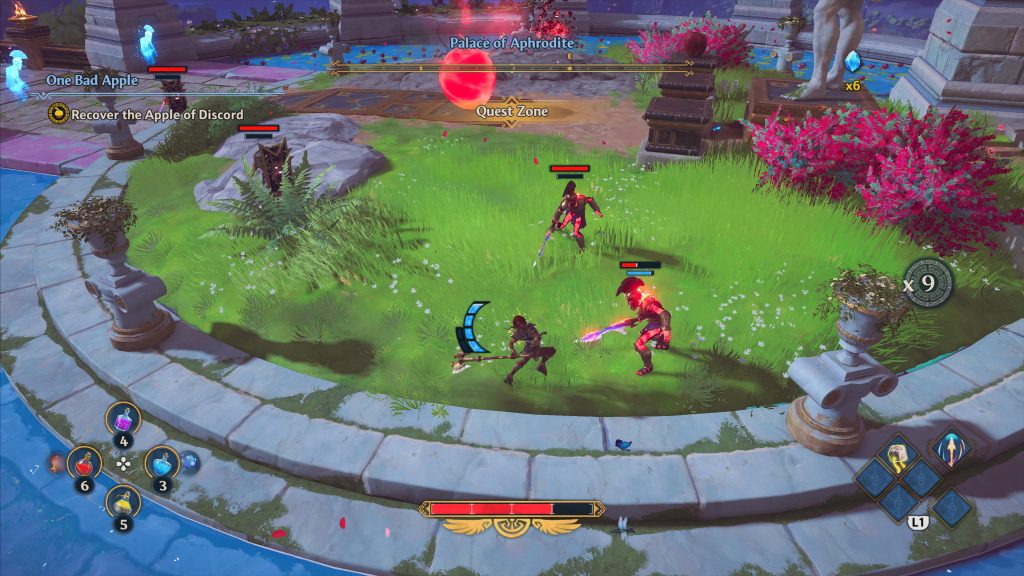 There are eight types of upgrade resources… You will collect Charon’s coins, needed for upgrading and unlocking the combat and utility talents as well as special attacks (godly powers), finding them mostly by solving fresco challenges (basically, big slide puzzles). Upgrading the equipment requires four types of colored crystals, blue being the most abundant due to the fact that most enemies drop it – the rest of the colors you’ll get from chests, mini-bosses, or rare nodes you’ll occasionally stumble upon. Strengthening your health, stamina, attack, and defense potions require orange pearls (additionally, you will need to gather plants for crafting those potions). Ambrosia, found in the crystallized form, is necessary to upgrade your health, and Zeus’s thunders are required for increasing stamina, essential for utilization of godly powers, climbing rocks, and gliding thru the air. Yes, you have wings in this game – Daedalus is also a significant player in Greek mythos. There is also a ninth resource, in-game currency needed for purchasing “special offers” from Hermes – it can be obtained by doing daily quests or buying it online. You know, with real money, this is Ubisoft, after all. 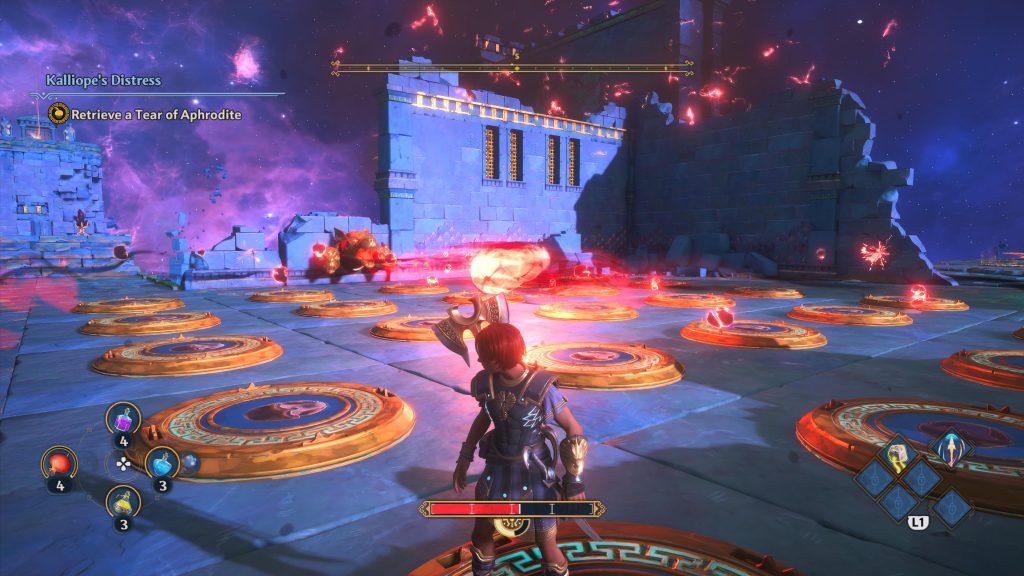 Biomes are stuffed with monsters of various sizes and aggressiveness – nastier ones tend to guard the loot chests and Tartarus rifts, paths to the underworld separated from the main game. Those rifts work like instanced dungeons with separate rules and challenges, and they are mostly about solving increasingly complex puzzles. Our main gripe with Immortals: Fenyx Rising is the sheer numbing strain of some puzzles which trade ingenuity for demanding prolonged effort and patience. Lots of them represent nasty, hard-core challenges comparable only with ones from later stages in Darksiders and Darksiders II. The challenge they represent is very sharply contrasted to the colorful, carefree aesthetics of the game. 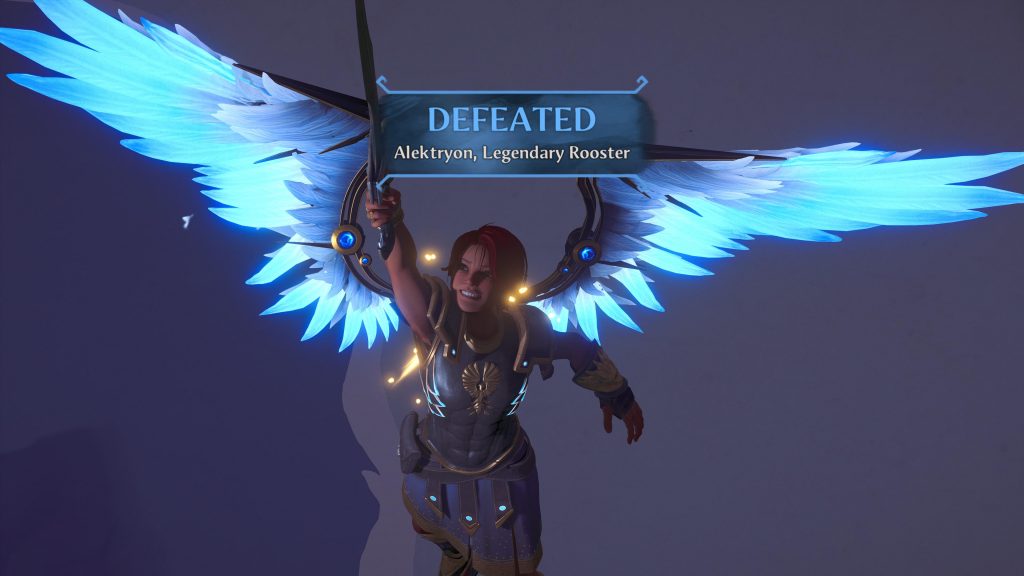 Ubisoft is on fire this autumn – first, they hit you with Watch Dogs 3, then piled Assassin’s Creed: Valhalla on top of it, and now decided to finish you with Immortals: Fenyx Rising, brute-forcing you to forget about random Cyberpunks and other stuff. Immortals is a solid game, not an instant classic as you might feel in the first couple of hours before hitting the tedious puzzle wall. This is a typical Ubisoft open-world game, vast, beautiful, stuffed with high-quality content, and even bloated in some parts. Giga-ton of activities it provides could very easily rob you of between 40 and 100 hours of free time, depending on the intensity of your completionist zeal.

Review platform: Xbox Series X
Ubisoft provided us with a free copy of this game for review purposes.
(read our Review Policy for clarification)