Legendary animals are a type of boss in Immortals Fenyx Rising. They’re beasts found across the Golden Isle, mythological creatures which you can fight for glory and rewards. Those rewards include phoenix skins which change the way your bird works, as well as wing skins for yourself. If you’re wondering where to find them, this guide will show you all Immortals Fenyx Rising legendary animal locations.

You’ll find four legendary beasts and two lieutenants in this area. The locations of the animals will also be revealed once you complete Aphrodite’s quest and free her from the tree. Their names are:

The Slayer of Adonis can be found in a valley filled with flowers south of the statue of Aphrodite, west of the hall of gods. It’s a giant boar that has a nasty rolling attack. Once you defeat it, you’ll get Phosphor the Lovebird, a green parrot skin for your bird.

The Nemean Lion is on top of a mesa in the southeastern corner of the area. The easiest way to reach it is to glide from the observatory, then scale the cliffs. When you manage to defeat it, you’ll earn the Phosphor of Zeus’ Lightning, which makes Phosphor’s Clone explode and do damage. 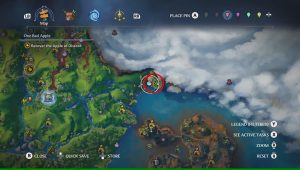 Alektryon is a rooster, which I’m pretty sure is a joke I don’t understand. Either way, he’s the easiest of the bunch, and you’ll find him in the middle of the Palace of Aphrodite, on the island in the west, near the constellation puzzle. Killing him nets you Phosphor the Stonegazer, which decreases stamina use when cloaked.

You’ll find the legendary bear Kallisto on the eastern border of the area, in the ravine between the Gates of Tartaros and the Valley of Eternal Spring. Defeating him in battle grants you the Phosphor of Companionship, which allows your cloak to stay on after lethal stealth attacks.

We found Lieutenant Aello on the island between the lava rivers in the east, near the border with War’s Den. He’s a harpy, so be prepared to deal with attacks from above. Defeating him unlocks the Wings of the Revels cosmetic.

There’s also Lieutenant Okypete, another harpy, who can be found in the hot springs in the north of the area. Again, flying attacks and all.

We’ll keep playing, and we’ll update the guide when we find more of these legendary animals.