There are four lyre myth challenges in the War’s Den area in Immortals Fenyx Rising. In order to complete them, you have to find four small lyres scattered across the map, play them, remember the melodies, then go to the big lyre and repeat them. Playing the small lyre often involves solving a puzzle, too, but thankfully, you can skip that part. This guide will save you time by showing you Immortals Fenyx Rising War’s Den lyre myth challenge puzzle solutions, so you can just go to the big lyre, play them and get your Charon coins.

The first lyre can be found in the southeast of the area, near the border with the Valley of Eternal Spring. It’s surrounded by unlit braziers – you need to light them following the clue on the wall. Only the ones that match the picture of the helmet facing right should be lit. The combination when playing the lyre is 3,1,1,2,4,3. 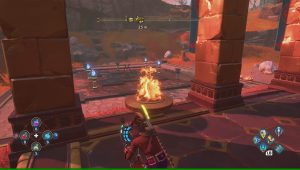 The second small lyre is east from the first one, by the sea. You’ll notice two sunken giants by the coast – that’s where you should look. You need to light three braziers in order to enter the room with the lyre – one is on the cliff to the left, another is on the back of the neck of the giant on the right (the one with the outstreched arm), and the last one is on the left shoulder of the giant on the left. The combination is 2,3,1,4,2,4. 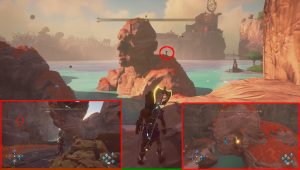 The third one is in Ajax’s Fort. To get it, you need to grab the two boxes from the left and right – one requires you to stand on the pressure plate and pull it telekinetically, the other requires you to break a wall and climb up to it. Once you have them, stand on the pressure plate in the middle of the room and throw them into the tunnels on the left and right, onto the blue pressure plates. This will open the red barrier, letting you approach the lyre. The combination is 1,1,4,2,3.

The last one is in the northeastern corner, under the big metal statue. You need to press a bunch of buttons in order to open the door – you’ll find them in rooms around the statue, and each one will be guarded by a puzzle. All of the puzzles are about blocking lazer beams using a metal box. Once you’re under the statue, pull the lever and stand on the switches in the same order in which the lazers light up. The combination for the lyre is 2,1,3,2,3,4.