Needle in a Haystack is a quest in Kingdom Come Deliverance. It will task you with entering a monastery disguised as a novice, finding a certain monk and bringing him to justice. It’s a long, arduous quest, which many find boring even without the bugs. Players are having trouble entering the monastery, discovering who Pious really is, etc. If you’re fed up with it, you’ll find a simple solution in our Kingdom Come Deliverance Needle in a Haystack quest guide.

How to enter monastery?

If you want to do things the “right” way, you’ll need to become a novice before you can enter the monastery. This means getting a monastery entry writ – you can steal it from the inn near the monastery. It’s in the chest in a room upstairs (the one where Karl is sleeping). You’ll then have to store all your stuff somewhere before you’re admitted.

If you don’t care about doing things the “proper” way, you can simply climb the scaffolding by the monastery and jump down onto the cloister roof. You’ll take a lot of damage, but with a little luck (and armor), a few bandages will fix you up.

Where to find Pious?

Pious is actually Novice Antonius. If you’re going the righteous route, talk to him and tell him you’re looking for Pious. He’ll poison your food during the next meal, then confront you. Agree to help him, and you’ll need to get some keys and some blood. Sneak into the kitchen during the night and write up an order for blood (there’s a paper on the table), then go into the back room and find the monastery key on a shelf. 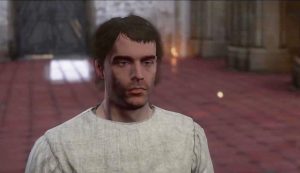 On the other hand, if you just want to kill Pious, you can use the “sucide jump method” to gain access to the cloister, then run into the monastery and slash Antonius during mass. It’s the fastest way to end the quest, but not the most lawful.

Needle in a Haystack quest bugs

Since there are a lot of bugs in the quest, you might want to just get it over with as soon as possible. If you have no qualms about killing, just skip the investigation and kill Pious. Otherwise you might end up with disappearing items, not getting the die from Pious when you help him, your own stuff getting flagged as stolen after you leave the monastery, etc.