Bosses are an important part of most action-oriented games, and Lost Ark, being an MMOARPG, is no different in this regard. These bosses exist to challenge you – not just your character build, but also your knowledge and mastery of the game. And it doesn’t hurt that they provide some of the best loot once you’ve killed them. One of the earliest bosses you can face in Lost Ark is Rudric. Since locating this undead scourge can be complicated, our Rudric Lost Ark – Where to Find Rudric guide will help you find and defeat him. 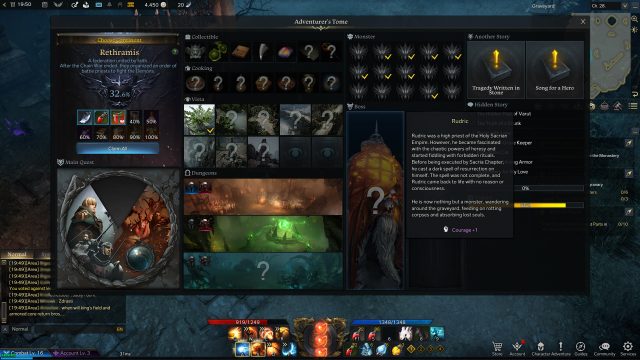 Where to Find Rudric Lost Ark

The Adventurer’s Tome in Lost Ark serves to catalog all the different things you can do in a specific zone. When browsing through all the Rethramis zone content, you will come across Rudric. He is a World Zone Boss for Rethramis. His description doesn’t give you a whole lot of information to go on. It mentions that he was once a high priest of the Holy Sacrian Empire, who fell to evil. Now, he is an undead abomination that is wandering around a graveyard.

The graveyard is, of course, the Graveyard area, which can be found east of the Regria Monastery in the Rethramis Border zone. We have marked where he can be found in the screenshot down below. He will spawn there every 30 minutes. If killed, you will need to wait until he spawns there again. Rudric is very hard to take on by yourself, so it’s advised to do this with a group of other players on the server. He has several nasty attacks. When you see a red arc in front of him, get out of the way, this is a really damaging assault. Likewise, from time to time, a blue circle will appear around him. Don’t be caught in this, since it causes fear.

The way this works is that the game puts different groups of people on the server on separate channels. Rudric spawns on one of those channels. So, keep an eye out on the chat to see if anyone shouts about Rudric appearing on their channel. Ask them which channel they are on (they can see this information at the top right corner of their screen, above the minimap). Once you find out where he is, teleport to that channel and kill him – either with friends or randoms. Defeating him will award you with a +1 to Courage, and some really nice loot. This loot includes the Rudric Card and several pieces of Epic Gear.