Rapport is defined as “a close and harmonious relationship in which the people or groups concerned understand each other’s feelings or ideas and communicate well.” In Lost Ark, this is a system that the game uses to track how much NPCs like you. Since having higher Rapport with other characters will open up things such as new quests, you definitely want to build this up as high as you can. Our Lost Ark Rapport Guide, Best Rapport Gifts & NPCs article will explain the ins and outs of this complicated system. This includes clarifying how does Rapport work, how to increase it, what are the best Rapport NPCs, best Rapport gifts, and where to get these Rapport gifts. 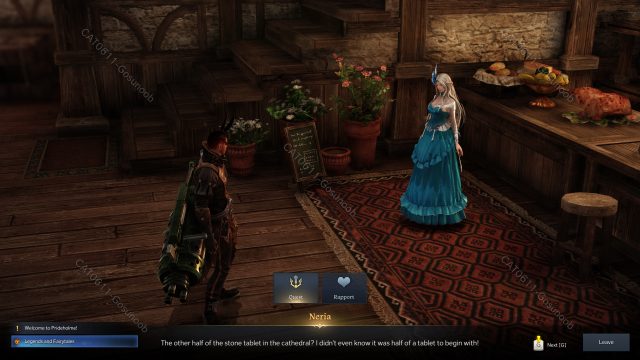 How Does Rapport Work in Lost Ark

The Rapport system is a measurement of how much the NPC likes you. It has several tiers, starting at Neutral, followed by Amicable, Friendly, and Trusted. A few NPCs can also take this to another level beyond Trusted called Affection. When you reach these higher levels, you will get rewards and new Quests will open up. Each of these NPCs also have Virtue stat requirements that you will need to meet. These are: Wisdom, Charisma, Courage, and Kindness. If you don’t have these high enough, you won’t be able to raise Rapport until you have these Virtues. As you can see, this is a very involved system, one which takes a lot of time and grinding to get to the highest levels. You can find more information in our detailed guide about Virtues and how to increase Charisma, Kindness, Wisdom and Courage.

How to Increase Rapport With NPC in Lost Ark

Where to Get Rapport Gifts in Lost Ark

As we mentioned, each NPC has gifts that they prefer. You can see these in the Adventure tab, or by pressing Alt + N. To get gifts, you will need to earn heart-shaped currency from doing daily tasks and events. You can then trade this currency for gifts from merchants and other vendors.

While there are benefits to doing this with every NPC, there are three NPCs that particularly stand out as the best and most useful. These are: Beatrice, Sasha, and Captain Cavery. This is because these three will net you a Giant’s Heart on their higher Rapport levels.

Each NPC has gifts that they react to better and which gives you more Rapport with them. For Beatrice, Sasha, and Captain Cavery, these are: Fragrant Peach (for Beatrice), Stern Scrap Iron (for Sasha), and Stalwart Cage (for Captain Cavery).