Lost Ark has a lot of stats. These come in the form of values such as Intelligence, Attack Power, Endurance, Crit, and many more. Stats such as these directly impact how lethal and durable you are in combat. However, there is another set of secondary stats. These are called Virtues, and they include Charisma, Kindness, Wisdom, and Courage. They have a very specialized role in the game, but that doesn’t make them any less important. In this Lost Ark Virtues, Charisma, Kindness, Wisdom, Courage guide, we will explain how they work and how to increase each one of these. 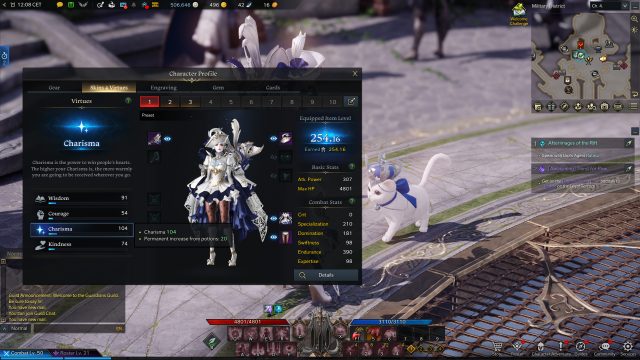 These four Virtues are used to build up Rapport with NPCs. Different characters have different Virtue requirements, and when you meet these, you will unlock new content such as quests and rewards. As you can see, raising these Virtues is a great way to get more out of Lost Ark. In the next section, we will show you how to increase each one.

How to Get & Increase Charisma in Lost Ark

Luckily, there are many ways to increase any Virtue – including Charisma – in Lost Ark. You can do this by earning titles (from Achievements), completing Adventurer’s Tome challenges (such as Hidden Stories), quest rewards, collectibles rewards, Rapport Rank rewards, Rapport dialogue rewards, equipping different skins, and doing Una’s tasks.

Besides this, the other way to increase Charisma is by obtaining and consuming Charisma Potions. Each one of these will increase your Charisma by +10. There are many of these in the game, and you can get them from activities such as Rapport and Reputation rewards, as well as from quests.

How to Get & Increase Kindness in Lost Ark

You can get and increase your Kindness in Lost Ark the same way as you would with any other Virtue. Talk to NPCs and build up good Rapport with them, complete quests and challenges, and you will soon increase it just by playing the game. Of course, keep an eye out for Kindness Potions as well.

How to Get & Increase Wisdom in Lost Ark

The same as with every other Virtue. Play the game, do as many quests and side-content as you can and your Wisdom will increase over time. The best way to quickly increase it is through Wisdom Potions.

How to Get & Increase Courage in Lost Ark

You can increase Courage in Lost Ark by doing the same things that will result in the increase of the other three Virtues. By playing the game and completing quests, finding collectibles, and doing other such side-tasks, you will increase your Courage over time. Of course, you should also concentrate on getting Courage Potions, as these will immediately increase your Courage by 10 points.