Blue & green diamonds in hotel lobby are two of the gems you can find in the Grand Lobby level of Luigi’s Mansion 3. They’re the first gems you’ll see in the game – both are visible the first time you visit, but you can get neither before you’ve obtained more tools. You might spend quite a while trying to get them the first time you’re there, before you realize you should just come back later. This guide will show you how to get blue & green gem diamond in hotel lobby in Luigi’s Mansion 3.

How to get green gem in Grand Lobby? 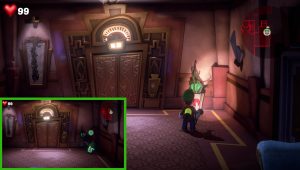 How to get blue diamond in hotel lobby?

This is the first gem you’ll notice when arriving in the Grand Lobby. It’s above the bookshelf to the left of the reception. It’s taped to a wooden case, and you’ll need the help of your pal Gooigi to reach it. Go up the stairs and to the left, following the path until you’re above the diamond. Turn around and blow the carpet so it rolls up – it will reveal a grate in the floor. Summon Gooigi and make him squeeze through it, then head towards the gem. Once you reach the case, kick it and it’ll fall down and break, releasing the gem. Now all you have to do is go back and pick it up.