Shield ghost is one of the mini-bosses in Luigi’s Mansion 3. You’ll encounter him in the castle, in a drafty wine cellar. He’s not like other ghosts, because he has a shield. This makes him seemingly immune to your vacuum cleaner. Just trying to suck him in won’t work – you’ll have to disarm him first. If you’re having trouble doing that, this guide will show you how to defeat shield ghost in castle in Luigi’s Mansion 3.

How to kill ghost with shield?

Shield ghost will always face you – there’s no way to flank him. If you try vacuuming him, his shield will get stuck and he’ll slap you in the face. There is one way to disarm him, though. Try shooting a plunger extension at the shield, then suck that up. Keep pulling it, and once the circle is full press A. Luigi will rip the shield from his hands and smash it against the stone, cold floor.

Now just fight him like a regular ghost. After you’ve slammed him against the centuries old, foot-worn stone several times, he’ll pull up another shield. This time, he’ll summon two golden buddies to help him out. They’ll hide in the fruit barrels, surfacing only to throw watermelons at you. You can safely ignore them until you’ve dealt with shield ghost. Shoot another plunger at his shield and repeat the whole process.

Once you’ve dealt with him, approach one of the barrels and kick it. If a ghost appears, use the Strobulb to stun it, then vacuum it and slap it around the room. Do this to both of the golden sidekick ghosts and the doors will unlock. Make sure you collect the key from the middle barrel and the sword gem from the ledge above the rightmost barrel. 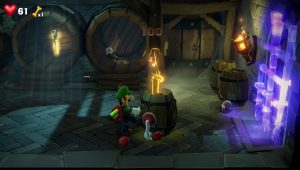