Chest at castle entrance is one of the hidden chests in Luigi’s Mansion. It’s not really hidden – you’ll see it behind the counter, under the eave, when you reach the castle gate on the sixth floor. Reaching it is another problem altogether. Since you can’t really jump over the counter, you might spend too much time here looking for a solution. It’s deceptively simple, and it took us a while to figure out. If you’re in the same boat, this guide will show you how to get chest at castle entrance in Luigi’s Mansion 3.

How to reach chest in front of castle gate?

As we’ve mentioned, it’s deceptively simple. You’re probably overthinking it. The solution is to just go through the gate (towards the castle entrance), then spawn Gooigi and have him go through the fence on the right. He’ll squeeze through the bars and drop down next to the chest. That’s all there is to it. 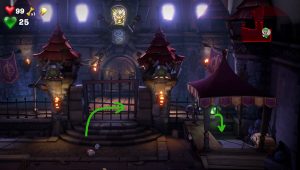 We spent far too long on potential solutions here, ignoring the obvious. We tried to vacuum the helmet hanging on a nail on the beam. We tried to extinguish the torches on both sides of the gate. We even sucked in the green banner, thinking it had something to do with the solution. It’s far enough from the introduction of Gooigi that we had already stopped trying to Gooigi our way out of every single problem. That’s some pretty elegant design there – instead of making a convoluted puzzle, you just make players expect one and let them wrack their brains while ignoring the correct solution.

This is probably not going to be the last time the game plays us, instead of the other way around, but this is surely going to be a lesson that keeps us on our toes.Featured Videos