Pre order bonus items in Mafia Definitive Edition include a gold pistol, a don outfit and a Smith v12 limo. They’re all part of the Chicago Outfit Pack, and you can only use them in free ride mode. They’re available from the get-go, but you have to find them. Some people have had trouble locating them, which is why we’ve decided to write a guide about Mafia Definitive Edition pre order bonus items – gold pistol, don outfit, limo.

Again, these items are only available in free ride. Don’t expect to find them in story mode. We found the car and suit after completing chapter 1 in the story, and the pistol after the start of chapter 3.

The outfit can be found in the wardrobe at Salieri’s place, which is in the storage room upstairs. This suit is one of the only costumes you’ll have available at the start, but as you progress, you’ll unlock around 20 different outfits.

The white limo is also at Salieri’s – not in the building itself, like the suit is, though. Go around the back and you’ll see a shed with a wooden double door – that’s the garage. Approach the door and interact with it, and you’ll get to pick a vehicle. The Smith V12 will be one of the choices. 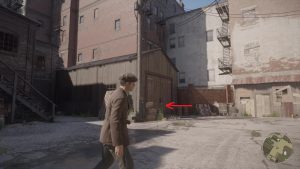 The golden pistol will appear in Vinny’s armory, in the building next to the garage behind Salieri’s. It’ll be on the table to the left as you enter. We only went there after starting the molotov mission in the story mode, but it should be available from the start. If it’s not, push the story a bit further before you check back.

NEXT POSTChicago Outfit DLC Not Showing in Mafia Definitive Edition