Phone booth challenges are side missions in Mafia Definitive Edition. There’s thirteen of them, and they’re available in free ride mode. Each one will give you different tasks, but they’ll all reward you with cool new stuff upon completion. But before you get to any of that, you’ll have to find and complete the starting side mission. If you’re having trouble finding it, or the rest of the phone booths, our Mafia Definitive Edition side missions guide will show you all phone booth locations.

How to start free ride side missions in Mafia Definitive Edition?

First of all, you might have to progress the story a bit before you can do this. We’ve only started playing these after completing the whole story, but some people mentioned the missions not showing up while it was still in progress. In order to start, you’ll have to head to Salieri’s and look for a note on the pool table. In it, someone calling themselves Herbert Baskerville will ask you to go to a phone booth at the westernmost point of Little Italy. This will be your first side quest.

Drive to the place from the note mentioned above, which is in front of the Lost Heaven Paint & Wallpaper Co. and pick up the phone. You’ll have to drive a certain car to a certain location quickly, without damaging it.

Once you’ve finished the first task, ten other notes will appear all over Salieri’s, pointing you towards other phone booths where you can undertake new challenges. You don’t need the hints if you’re going to follow our guide, but you do need to pick up the notes – without them, the phones won’t ring and you won’t be able to start the quests.

You’ll find this one in the northern part of Chinatown. It’s at the end of the street that goes to the Red Flower Mansion, across the road from some restaurants.

This one is in North Park, on the eastern side of the river. You’ll find it across the street from Pepe’s restaurant, a bit southeast from the Terranova Bridge, directly south from the Lost Heaven General Hospital.

You’ll find this phone booth with the side mission on Central Island. It’s on the western side, a short way north from West Harbor Bridge. There’s another one further east down the same street, on the next corner. Be sure to check that one out too, in case this one doesn’t work.

This booth is located in the Downtown area. You’ll find it all the way to the south, in the street that goes on from Marshall Bridge. It’s directly west from the city cemetery.

This booth can be found in the industrial district in Holbrook. It’s in front of the factory in the northeastern corner of the area, where a warehouse is marked on the map in pen.

You’ll find this booth on the border between Downtown and Oakwood. It’s across the street from the building with the round side in the north of Oakwood, southeast from the Federal Revenue Service.

The next one is in the same area – Oakwood. You’ll have to go to the opposite side, though – it’s to the southeast. You’ll find it on the eastern edge of the district, in front of the Oakwood Junior School.

This booth is in the Works Quarter. It’s all the way to the south, in the harbor. Go to the western side of the harbor, west of the piers, to the only place where the road leads inside, and you’ll find it easily.

This one’s pretty easy to find, especially since the note itself mentions the Fyer Dam power station. Head to the dam, on the eastern edge of the lake, then south until you reach a big concrete building. That’s the power station, and the booth will be next to it. 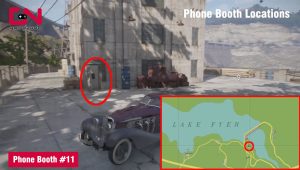 The note mentions you should visit this one during the night. You’ll find it at the trolley terminus in the western part of the Works Quarter. The booth is right across the tracks from the station.

For this one to start ringing, you’ll first have to complete all of the previous ones. Once you do, a new note will await you at Salieri’s. Once you pick it up, head to a corner a few block away from Salier’s, in Little Italy. 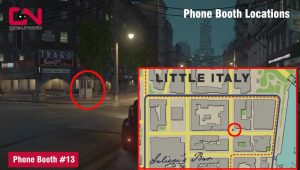 NEXT POSTHalloween Hats in Among Us