Depots are special, locked bunkers in Marvel’s Avengers. These fortified structures can be found in War Zones, and if you manage to open them, you’ll get gear, resources, collectibles and other treasure. The game doesn’t do a great job of explaining how you can open them – you’ll most certainly figure it out on your own after a while, but you’ll miss the early ones this way. If you’re wondering how to open depot in Missing Links in Marvel’s Avengers, this guide will show you just that.

How to open depot in Missing Links?

In order to open a bunker’s door, you’ll have to press several buttons in a short amount of time. These can either be pressure plates on the ground, which you stand on to activate them, honeycomb switches on the wall, which you have to punch, or buttons on pylons which you need to shoot with your ranged weapons. Their default color is yellow – when they’re pressed, they turn blue. If you don’t activate them all quickly enough, the sequence will restart.

There are lights above the depot door that will tell you how many switches there are in total – it’ll be either two or four. Once you’ve determined their number, use Tactical Awareness to scan the surroundings – it’s Up on the D-Pad or V on keyboard. This ability will highlight interesting things in the environment, including all the switches near the depot, so you don’t have to spend a lot of time looking for them. 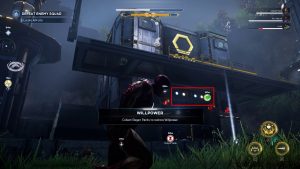 Once you know where they are, figure out the optimal route and activate them in quick succesion. The door to the depot will open, letting you access the goods. The loot you find inside is random, but you’ll get to snag the treasure every time you replay the mission, so it’s not that bad.