Locking onto enemies in Marvel’s Avengers helps you defeat them more easily. It makes your ranged attacks hit without having to aim too much. It’s especially useful when playing characters who rely heavily on ranged attacks, or using a controller, which makes precise aiming a bit fiddly. Some players are having issues with using the lock-on feature, which is why we’ve written this guide, to explain how to lock on to enemies in Marvel’s Avengers.

How to lock on target?

If you’re playing on console, it’s pretty much the same as with other games. All you have to do is press the right analogue stick (R3) in order to lock on to a target. Pressing it again will turn the lock off, and pushing the stick left or right will cycle through targets.

The same is true for the default control scheme if using a gamepad on PC. If you’re using the keyboard and mouse, the default binding for locking onto enemies is the middle mouse button (the scroll wheel). If you’re anything like me, and hate using the wheel as a button, you’ll be happy to hear you can rebind the command to any button you like, either on the mouse or the keyboard. 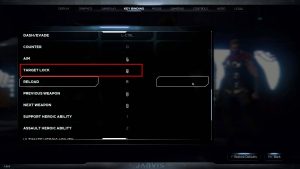 It’s an extremely useful feature, since it allows you to stay on the move and still keep your aim on a particular target. It’s also great when you’re using ranged abilities and don’t have the skills required to manually aim and fast, moving targets. It can also help you prioritize enemies in the order you want even when things get really hectic.

Of course, not all heroes will benefit from it equally. The Hulk isn’t one for finesse, so he doesn’t really need to lock onto targets all that much. Iron Man, on the other hand, with his rockets and things, will benefit greatly from the ability to not worry about aiming.