Should you choose dark or light dialogue options in Marvel’s Midnight Suns? And how does this Light/Dark moral system exactly work? Firaxis Games’ new turn-based tactics game is here, featuring many iconic Marvel heroes. Aside from turn-based combat, the game also has many role-playing elements. And Hunter’s “Light and Dark” alignment system is at the core of role-playing. Read on as we explain the differences between Light and Dark in terms of gameplay, story, different endings, skills, and more. 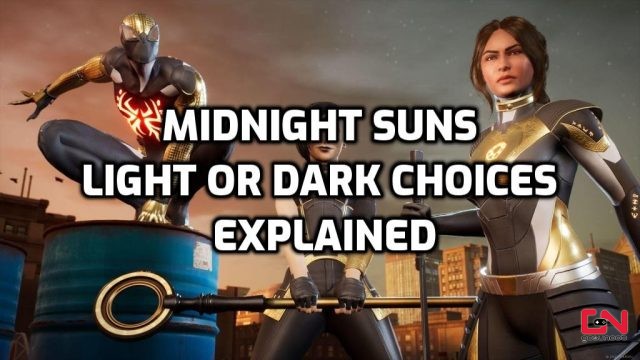 Being partially an RPG title, Marvel’s Midnight Suns features a type of moral system based on your conversations with other heroes, help requests, and the usage of abilities. Hunter’s Light or Dark balance represents this system. Given that the Hunter (player character) is a completely new hero, you will get to shape their personality traits and moral compass.

However, don’t let these names fool you. The Hunter’s Light and Dark alignment in Marvel’s Midnight Suns isn’t as simple as “good” or “evil”, there are nuances. In terms of story, it will help you build friendships with various characters based on these choices. Some prefer Dark options in conversations and help requests, while others like Light more.

When choosing Light or Dark dialogue options, we advise you not to worry too much about it. After all, this is a role-playing game. Thus, choose those options you think your character would say in a given situation. It will affect some of your abilities, but not as much as playing cards with Light or Dark alignment. The only important thing here is your friendship level with a specific character, which may be positively and negatively affected by your Light/Dark choices. If you are unsure what someone will like as an answer, you can always use neutral options that don’t have affinity attached to them.

What Is the Difference Between Light and Dark Skills?

In terms of combat, Light-aligned abilities are more defensive and support-oriented. On the other hand, Dark abilities are more aggressive and attack-oriented. However, the main difference is that Dark abilities tend to be stronger but have a price attached. The most basic example is your healing ability. The Light version will heal for some amount, while the Dark version of heal will fully replenish another hero’s life and damage you in the process.

Ultimately, choosing a Light or Dark path for your deck and skills depends on your playstyle and the fantasy you wish to fulfil. However, speaking strictly about a power level, there’s a consensus that Light skills are easier to play during your first playthrough. Thus, we suggest going with a Light build if you want a safer route.