Multiplayer missions in Mass Effect Andromeda reward you with items that you can use in the single player campaign. These are called Pathfinder rewards. You can earn them both by sending out strike teams and playing APEX Strike missions. However, they don’t automatically transfer into the single player; you have to claim them. In this guide, we’ll explain how to collect multiplayer rewards in Mass Effect Andromeda.

How to Claim ME Andromeda Multiplayer Rewards in Single Player

Some players have been wondering whether they have to do something in order to collect their multiplayer rewards, or if they just get them. Well, here’s the breakdown. Rewards that apply to the multiplayer are applied automatically. On the other hand, you do have to claim rewards that transfer to single player. These are the Pathfinder rewards, and you can earn them through completing APEX missions, or sending out strike teams to do the dirty work. Here’s how to transfer Pathfinder rewards.

Whether you got your Pathfinder rewards by participating in APEX missions or by sending out strike teams, the process is the same. Head to the nearest Strike Team Mission terminal. You can find one on the Nexus in the Operations area, or on the Tempest in the Research Room.

Access the terminal and take a look at the top of the screen. You’ll notice three icons there, and one of them looks like a box. Go to that menu, and it will list your Pathfinder rewards. From there, it’s simply a matter of claiming your loot boxes. When you do, all the loot will transfer into your single player campaign. 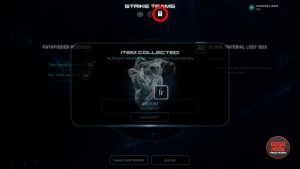 Pathfinder rewards can give you some very useful items and consumables. You can get anything from Research Data to Materials, Credits and so on. They are divided into Bronze, Silver and Gold loot boxes. Obviously, the higher the tier, the better your rewards will be. If you have any other questions about the multiplayer, you can check out our How to play Co-op in Mass Effect Andromeda and Mass Effect Andromeda Multiplayer – Everything We Know articles.