Remnant Tiller is one of the side quests in Mass Effect Andromeda. It takes place on H-047c, a destroyed planet in the Remav system. To finish it, you’ll have to find a Remnant conservatory, a special kind of vault, and clear it out. The whole vault is a big puzzle, and it can be very disorienting. In this guide, we’re going to show you how to complete Mass Effect Andromeda Remnant Tiller side quest.

How to complete H-047c Remnant Vault 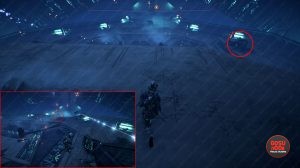 Finding the vault is the easy part – it’s completing the puzzle inside that’s hard. Once you’re inside, activate the console on your right in the first room. It will spawn a friendly Remnant observer – a non-hostile NPC that will help you by working the consoles you can’t. Scan the console near the locked door, and the robot will open it. This is going to happen a lot throughout the dungeon.

You’ll end up in a large hall with a bunch of forcefields. There are two corridors leading towards the end chamber. Go down the western one (to your right). As soon as you’re in the hallway, turn right again and interact with the console. It will spawn an Observer. Exit the small corridor and turn right. Approach the console and scan it.

There are other consoles you can make your Observer buddy scan around the vault, but they only reward you with loot. In order to keep the guide as simple as possible, we’re not going to show them. 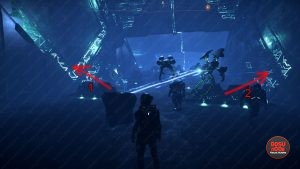 Once the Observer is done with the console, it will open up two secret rooms nearby, one on the north wall, the other on the south. They’ll be marked with glowing orbs, visible only when you approach. Activate the northern one first (one orb), then the southern (two orbs).

Continue south into the next room. Look to the east, and you’ll see a floating island between the corridors. Approach the edge, and a bridge will start forming. Cross it and get into the eastern corridor.

Continue using consoles to progress farther south, and you’ll reach the tiller room. An Elite Destroyer will be waiting for you. Use cover wisely. When you activate the tiller, you’ll have to solve a Remnant Decryption Puzzle.

NEXT POSTME: Andromeda How to Unlock Combat Drone – Remnant VI