Uncovering the Past is a Voeld side mission in Mass Effect Andromeda. During the mission, you’ll head into a frozen cave and discover an ancient AI. The AI acts and speaks ominously, but is there more to it? You’ll have the option to either destroy it, or use its knowledge to your advantage. In this guide, we’ll show you how to complete the Mass Effect Andromeda Uncovering the Past side quest and what happens if you kill the AI or let it live.

How to Complete Uncovering the Past Side Quest

After you’ve completed the “Remove the Heart” side quest, this one will unlock. Ja Niihk’s shields are now down, so you can access the kett base. Follow the navpoint from heat lamp to heat lamp through the gorge until you eventually reach the cave entrance. Be prepared to blast some kett on your way.

Once you enter the cave, dispose of the kett inside and make your way forward down the rightmost path. Rescue all of the angaran prisoners. Talk to the one that’s now between the two cages and, if you keep asking, he will tell you about something hidden behind a wall of ice. Scan the blocked entrance and you’ll automatically set an explosive charge. Run back behind the barrier behind you and duck. Go inside to meet the ancient AI. Right off the bat, it starts lying to you and being super vague about everything. When the released angara tries to extract her data (I think), the AI starts electrocuting him. Time to choose – will you kill the AI or not? 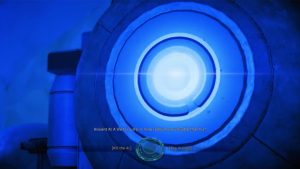 If you spare the AI, it will kill the angaran prisoner. It will then plead that you take it aboard the Nexus, because it wants to be with SAM. It remarks that it has a consciousness, as well as feelings and desires. Some of your party members will probably object to this. Surprisingly, though, Jaal seems to be very much on board with the idea of sharing the AI’s knowledge with Nexus. You’ll then have another two options – keep the AI to yourself, or hand it over to the angara. Here’s what happens, based on your choice. 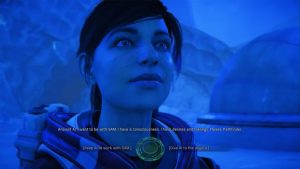