Are you getting the NBA 2K23 726e613d error code whenever you are trying to apply badges? This rather frustrating experience can be really problematic for players who are just starting their builds in MyPlayer or MyTeam. Badges are a core part of the NBA 2K games for quite a while now, and not being able to apply them is a serious issue. In this guide, we explain what we know about the NBA 2K23 726e613d error and how it can be fixed. 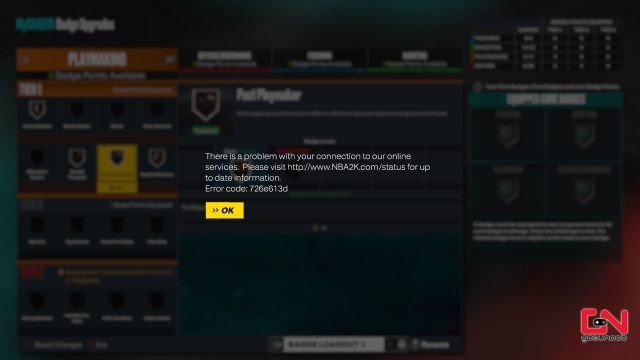 Unfortunately, since the launch of NBA 2K23, the game has been plagued by bugs and errors. From the Going National glitch to the Palace Intrigue freezing issue, it seems that there’s a problem at every step. And the NBA 2K23 726e613d error code is a particularly nasty one.

No matter if you are trying to apply badges to MyPlayer or for your build of MyTeam, the issue is the same. You’ve got your first few badges, happy to apply them to your player. Only to be welcomed by this error when you hit confirm. Upon which the game either crashes on kicks you back to the main menu. And the badge application process is not saved, and you even lose the badge upgrade progress! So, is there a fix for this infuriating issue?

First and foremost this is a critical bug which will hopefully be fixed by 2K soon. However, in the meantime, we’ve found a possible fixe for the 726e613d error code in NBA 2K23. What we’ve learned is that, currently, there’s only one possible workaround for this unfortunate issue. Namely, Reddit user Matt08240 claims that it should work if you “try after 24 hours since the last build”. So, there you have it, try this method as a possible fix for the NBA 2K23 badge error. If that doesn’t help, try contacting 2K support directly and explain your problem.