Is NBA 2K23 constantly crashing for you? Does NBA 2K23 often freeze? If so, we might have a few possible solutions for you. The new iteration of the world’s most popular basketball video game is here. Unfortunately, as is often the case, these yearly releases of sports games are ridden with bugs and optimisation issues. If you are prevented from enjoying your virtual basketball experience due to frequent crashes and freezes, read on to learn about possible fixes for NBA 2K23 crashing on PC, PS5, PS4, Xbox One & Xbox Series X/S. 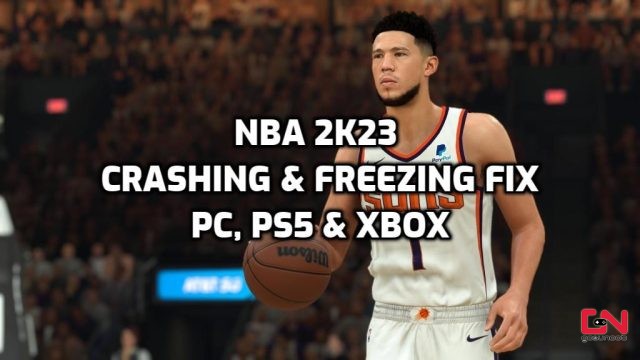 Before we proceed with a few possible solutions for your crashing issues, we must first stress a few points. Firstly, most of these problems are simply out of your hands, as the game has launched in a less-than-ideal state. Thus, until developers stamp out bugs and improve optimisation, there’s only so much you can do. Also, make sure that the NBA 2K23 servers are up and running. Now, when we pointed that out, let’s see what you can do.

Before we jump to other methods, we must first stress that NBA 2K23 was released in a very buggy state. Numerous glitches, such as the Going National bug, the 726e613d Error Code, or the Palace Intrigue issue, are causing NBA 2K23 crashing and freezing issues. For this, you may check the separate guides we’ve linked here for you.

In many cases crashing and freezing in video games can be a sign of GPU issues. Outdated drivers might result in many problems, such as poor performance, low FPS, artefacts, and more. You can check for the latest drivers via your GPU software. Otherwise, you can download them from the links below:

When playing games, it is often smart to turn off any unessential third-party apps that are running in the background. Many of them are known to cause problems and conflicts with video games. This is particularly the case for apps that have overlays in-game. This includes Discord overlay, Steam overlay, NVIDIA overlay, Overwolf, and other similar apps.

Sometimes games might not install correctly, and some files might be either corrupt or missing entirely, which can cause NBA 2K23 crashing and freezing issues. To prevent this verify the game files on Steam and the Epic Game Store:

Developers have officially confirmed that NBA 2K23 crashes upon launching when you try to start the game if you have more than 100 blocked users on PlayStation Network. We are not sure if this is a feature or a bug, but for now, try to bring that number down to 99 or less. This should fix the NBA 2K23 crashing issue on the PS5.

Finally, for those of you playing on Xbox Series X/S, make sure that you have the latest version of your system software. In addition, some players report that using cloud save instead of the local save file should be enough to bypass the NBA 2K23 crashing issue on the Xbox Series X.