Necropolis is a rogue-lite game from Harebrained Schemes, they of Shadowrun fame. In it, you play a Blackguard exploring the depths of the titular dungeon for mysterious reasons, killing monsters, swapping weapons and dying over and over again. It’s wildly different from the games they’ve made in the past, but it doesn’t quite work. You’ll find our full review below. 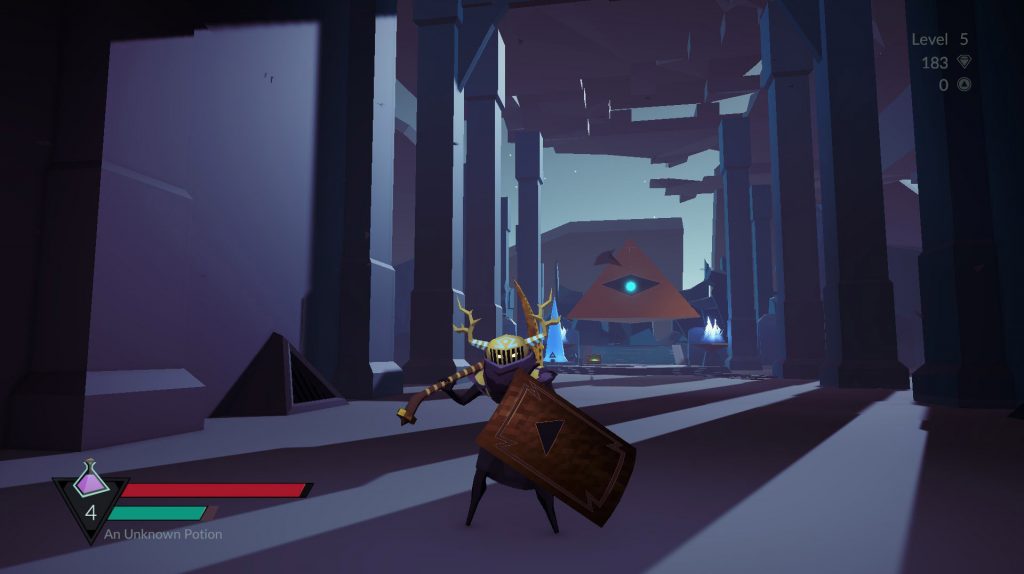 There’s little story to talk of – you’re a Blackguard, a guardian of Something or Other, and you’re descending the Necropolis for A Reason. The Brazen Head, a golden, floating pyramid, is both your guide and your jailor. It will offer snippets of history, advice and hints, all sprinkled with humor often clumsily walking the line between forced and natural.

There’s no tutorial to clue you in – everything you’re going to learn is going to be through trial and error. A brief glimpse at the control scheme (which cannot be changed, by the way) is all you get before you start smashing.


If you’re into lazy comparisons, you could call Necropolis a marriage between Dark Souls and a roguelike dungeon crawler. You’ll be exploring the floors of the randomly generated dungeon, delving ever deeper, murdering its inhabitants while gradually improving your arsenal. When you die, you’ll lose all progress and start from the beginning. There are no checkpoints, no reloading. Death is final.

Combat is a spin on the Dark Souls formula – similar enough to make it familiar to Souls veterans, yet different enough to make them sweat a bit while getting a feel for it. There’s no character progression – the only things that determine your success in combat are your skill and the equipment you’re using.

After the initial period of getting into the groove, I enjoyed the combat immensely. It’s responsive, with a wide variety of weapons that just feel fun to swing around. There are no stats here either, at least not explicitly. The only way to rank weapons is by tier – the higher the tier, the stronger the weapon. Other than that, it’s pretty much the case of choosing a weapon which fits your style best. The slower and heftier the weapon, the higher the damage. There are also elemental effects to keep track of – the game won’t tell you what affects whom in what way, so it’s another thing to discover by yourself.

The playful act of discovery is what pushes you on in the first couple of hours. Checking to see who you can topple with a shield bash and who’s too sturdy, who’s got a weakness to electricity, who can be staggered even with a dagger, etc… Learning the enemy patterns and getting to know your own character is a great drive in the beginning. It’s only when you start consistently reaching the lower floors that the game starts to come apart at the seams.

One of the biggest issues I have with it are the enemy spawns. Sometimes they are to be expected – a mound of bones turning into a bunch of skeletons isn’t exactly a surprise. On the other hand, a couple of Hoardmen materializing from thin air directly behind me, while I’m backpedalling away from a group far too strong for me to face… It’s not a fun thing to happen. The first time it did, I wrote it off as a bug. It soon became clear I was wrong.

It tainted the experience with a feeling of paranoia. I started looking over my shoulder far too often, afraid of being forced to juggle two groups of enemies and the fickle camera. I even had a couple of floors with enemies constantly spawning all around me. I started avoiding combat whenever possible, in a game that’s all about combat.

At the beginning of every floor, you’ll get a chance to unlock a golden chest, which rewards you with an item – a weapon, a shield or a piece of armor. All the best loot is supposed to be in them. You have to use Tokens of Favor to unlock them – these are collected by completing tasks on each floor. This is where the random numbers started working against me.

I’d regularly get tasks I cannot finish – to shatter Grine crystals, followed by three floors without a single Grine crystal. To eat a specific meal I won’t be able to prepare for a long time. To cast spells on a floor where potions are the only loot.

After that I’d get to the chest, spend my sweat-soaked token and get a weapon that’s weaker than the one I have. Or a suit of armor identical to mine. If I was lucky, I’d get a thing I don’t really want, but can make use of. Most of the time I wasn’t.

And the runs are long! There are nine floors in the dungeon. You won’t just outright die on an unlucky run – the suffering will drag on for an hour, maybe even two (unless you quit and restart). As more time passed, more of my failures could be attributed to the dice working against me, instead of my own inadequacies. It started feeling cheap and unfair. There was no middle ground, no tension – I was either riding the lightning or failing miserably.


Multiplayer is a whole other story: it’s a completely different game, worlds apart from the singleplayer. You can play with up to three friends, with free resurrections and friendly fire thrown in the mix. It’s much like Magicka, a chaotic romp in which you blindly swing your weapon and yell, hitting both friend and foe, waiting for the dust to settle so you can see who needs reviving.

The complaints I’ve voiced cast a long and dark shadow over the whole thing. Procedurally generated games live and die by their solvability, and Necropolis is unsolvable far too often. The significance of your input is dwarfed by luck. If the stars don’t align, you won’t win. Nothing else matters – not the wonderfully unhelpful items descriptions, not the beautiful low-poly aesthetic, not even that feeling of gradually mastering the world and the systems. Once I realized the dice were loaded, my heart sank. Playing with friends can be a great experience, but ultimately, Necropolis does what it says on the box poorly.

NEXT POSTDishonored 2 – What We Know About It