Aven Colony, a game produced by Mothership Entertainment LLC, and published by Team17 Digital Ltd, got its console optimization trailer. The game is currently in the pre-order stage, and it is coming out later next month, more specifically, on July 25th, 2017.

Aven Colony is a single player, sci-fi city-builder simulation. It was announced almost a year ago, on August 25th, 2016. At that time, it was in production for almost two and a half years, since November 2013. A month later the beta started, and now, it is in a state where it can see the light of day.

Mothership Entertainment is a team of four veteran game developers. Some of the games they’ve worked on are Stars Wars: The Old Republic, City Conquest, Fable 2, Metroid Prime 2 and more. They’ve been building Aven Colony on Unreal Engine 4.

Key features of the game are:
COLONIZE AN ALIEN WORLD: Build a new home for humanity on a world with a low-oxygen atmosphere, extreme electrical storms, shard storms, dust devils, deadly toxic gas eruptions from geothermal vents, and days so long they have their own seasons. Explore a variety of biomes, from the lush wetlands environment to the much less habitable desert and arctic.

MEET THE LOCALS: Encounter a variety of alien life forms, including giant sandworms, deadly plague spores, and a vicious fungal infection known as “The Creep.” 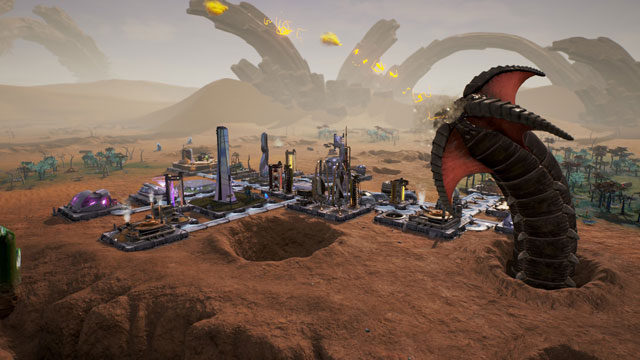 The price of the game is currently $30, or $27 with a 10% discount on Steam. Pre-order bonuses include a bonus map Cerulean Vale and an additional sandbox map. It features the harshest environment yet, and the greatest rewards.

It feels like it is a busy summer for city builders on consoles. Cities Skylines was launch on Xbox One, and it got its PlayStation release date set for August 15, 2017. The difference is that the setting of Cities is on Earth, while Aven Colony is Aven Prime, but there are still some similar elements.