One of the best, if not the best city building game Cities: Skylines announced that it is coming to the PlayStation 4 on August 15, 2017. After its major success on the PC since its launch on March 10 2015, it recently launched on Xbox One, and now it’s getting a PlayStation 4 port. If you are a fan of this genre, and you own a PS4, you should definitely try it out. The price of the Xbox One port was $40, and we can expect the same on the PlayStation 4.

Cities: Skylines is a city building, construction and management simulation. You are in control of everything in creating a functional (or not) city with all its services. One of the best features of the game is how important it is to make all these things works. A poorly placed crossroad can set back entire city blocks, but a simple road upgrade, or a good placement of a one-way road, can make them flourish.

The numbers speak volumes about how good this game is. Since its PC launch in 2015, the game has sold over 3.5 million copies worldwide, across all retailers for current platforms. Keep in mind that this game didn’t have the triple-A marketing resources, and these numbers are purely a product of the game’s quality and word-of-mouth. It was also one of the best selling games on Steam in 2016. 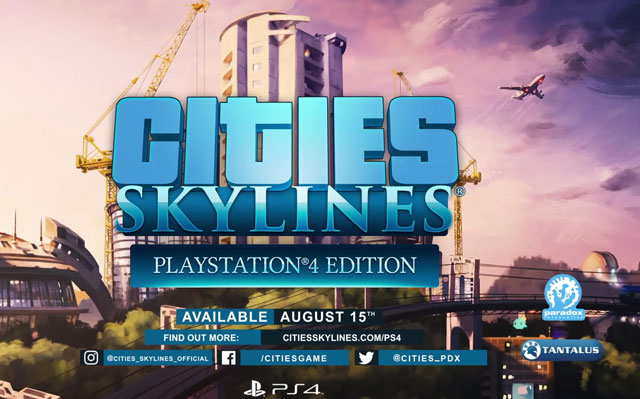 Cities: Skylines PlayStation 4 Edition will have the After Dark expansion coming with it. This was the game’s first expansion that went live on PC. It includes a day-and-night cycle and everything that comes with it, like expanded city services, leisure and tourism specialization and new transportation options to suit the changes in lives of the residents.

Some of the other main features include: planning road networks, public city services, managing districts and their polices, and in general just a wholesome experience in watching your work of art come alive and prosper or fail.

The PlayStation 4 version of the game was adapted by Tantalus Media. They are also responsible for the Xbox One Cities: Skylines adaptation a few months ago.

NEXT POSTPillars of Eternity Coming to PS4, Announcement Trailer Revealed