Chivalry 2, the epic multiplayer FPS – that’s First-Person Slasher, not Shooter – is out now on the PC, PlayStation and Xbox systems. The sequel to Chivalry: Medieval Warfare (released in 2012), developer Torn Banner Studios promises that Chivalry 2 is bigger and better than its predecessor in each possible way. Chivalry 2 has cross-play support for PC (currently available on the Epic Games Store), PlayStation 4 and 5, as well as Xbox One and Xbox Series X|S. The Standard Edition is priced at $39.99 / €39.99 / £34.99 and the Special Edition costs $49.99 / €49.99 / £44.99. It has a PEGI 18 rating and an ESRB rating of M for Mature. In Chivalry 2, you will be able to live out your medieval knight fantasy to the fullest. 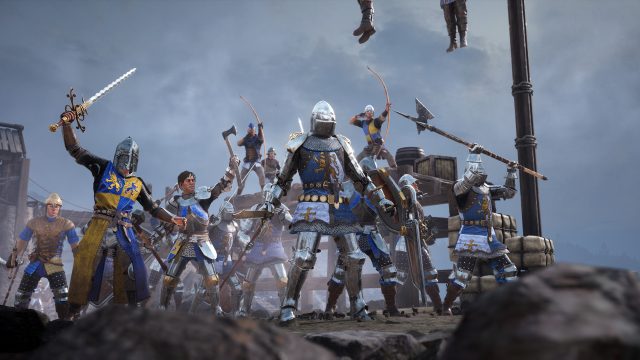 Torn Banner Studios CEO & Creative Director Steve Piggott says: “With the launch of Chivalry 2, we’re excited to have nailed our vision of creating the ultimate medieval battlefield game. It’s all-out insane, epic 64-player online carnage that finally delivers to gamers the intensity of being in your favourite medieval movie battle scenes. Chivalry 2 pulls you right into the action, delivering the satisfaction of an incredibly deep combat system, the cinematic glory of sieging castles, the chaos of a massive wave of knights smashing into each other, and hilarious Monty Python inspired voice overs. We can’t wait to hear our fans roaring their battle cries on the battlefield.”

Publisher Tripwire Interactive CEO John Gibson said: “When we started this journey two years ago, I knew that Torn Banner Studios would make a great first-person medieval combat game with Chivalry 2. Now that the game is done, however, I am blown away at what they have created. Chivalry 2 will redefine first person melee combat, and it has been a pleasure for Tripwire Presents to support Torn Banner in making this incredible game a reality.”

Players who have taken part in the Alpha and Beta programs can expect even new more maps and features in the full release. For all the players that are yet to try it themselves, Chivalry II promises to be an action-packed, high-octane multiplayer melee combat extravaganza.