It is launch day for Chivalry II and most people that want to try and play the game are getting the login error “Request Timeout or null response” because the servers are down. Chivalry 2 is a first person slasher as the developers like to call it. It is a game set in medieval times that pits up to 64 players in frantic melee PvP battles. It launched on June 8th 2021 at 5pm CET (8:00am PDT). As with any multiplayer game’s launch Chilvary login are probably caused by a rush of new players. We wanted to let players know that the game is currently experiencing technical issues and you can’t login into Chivalry 2. On all platforms (that means consoles and PC) people are having log-in issues. We’re tracking if there’s a fix for login error request timeout or null response in Chivalry 2. 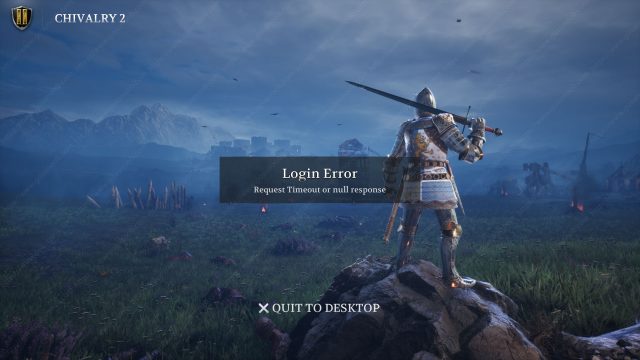 Official Twitter account of Chivalry 2 tweeted that they are aware of players on all platforms currently experiencing log-in difficulties with the game. I managed to download and start playing the game. Finished the tutorial and the first bot battle. Afterwards I attempted to play a multiplayer match. It did not findd a match automaticaly so I went to browse the servers. When I attempted joining one that had only a few players on it I got a message that the server was full. I couldn’t get the starting screen of the game after that. I’ve closed the game down and restarted it on PC. From then on I’ve been getting the request timeout or null response login error in Chivalry 2.

We are currently investigating #Chivalry2 log-in issues present on all platforms. ?

After several more attempts it became obvious that there’s a larger server login issue. TO make things even more difficult for Tripwire Interactive it seems there was a huge problem with one of the major world internet providers and half of the most visited websites in the world had problems or were inaccessible. We are not sure if this is related to chivalry 2, but we’ll keep an eye out. If any of you managed to avoid this problem and started playing please let us know in the comments. We’ll continue monitoring the situation and update this article as soon as we have new information.

I would also like to say that this type of problem is common for every server dependent game launch and I implore you to be patient and let Tripwire and Torn Banner Studios resolve the problems. What is important to know that it is not you who are having a problem with your internet connection or your internet provider. Developers confirmed it is an issue on their side and they’re working on it.

PREVIOUS POSTChivalry 2 Out Now on PC, PlayStation, and Xbox