Cyberpunk 2077 just had its first episode of the new Night City Wire series of videos. The first meal on the plate was a brand-new trailer. It showed various moments from the game. A bit of driving, a bit of dialogue, short scenes from the campaign, and lots of combat. Visuals are top-notch as expected and the whole atmosphere is very cinematic, even during gameplay snippets. All scenes from the trailer were from the prologue. If that’s true, the game’s prologue will be pretty action-packed.

Developers then talked about The Badlands, the huge area circling around Night City. Badlands have that cool Mad Max vibe when driving around but settlements look surprisingly colorful and lively. Cyberpunk 2077’s Ripperdocs are there to help players improve their minds and bodies. You will be able to install new upgrades that can have a lot of functions. From body armor to accuracy enhancements. 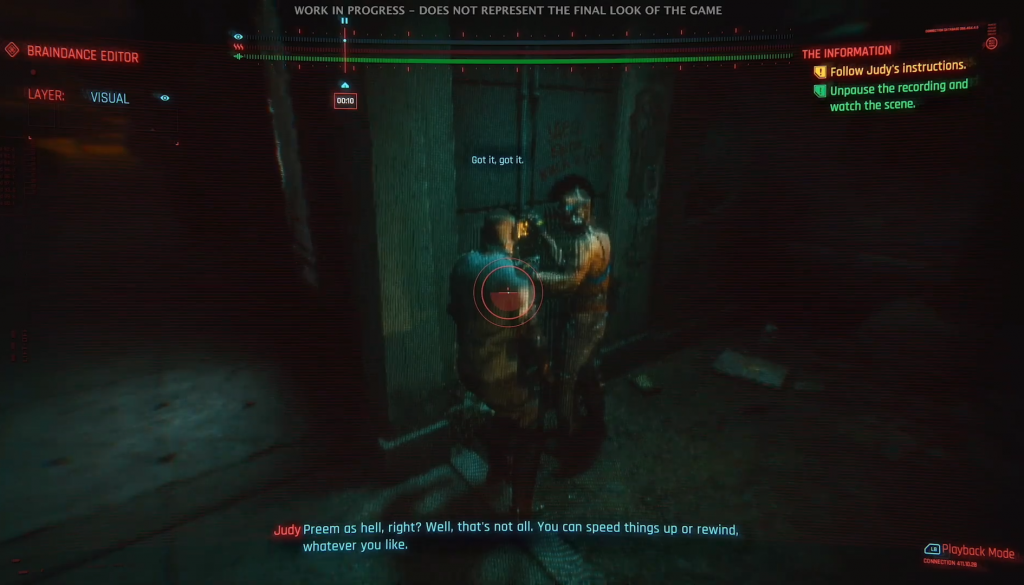 Cyberpunk 2077 will also receive a tie-in series called Cyberpunk Edgerunners. It’s an anime series coming to Netflix in 2022. The story is set in the same universe, in Night City. But the setting and the story will be brand new. The series is being created by Trigger, a Tokyo-based animation studio. It all sounds cool, but we’ll wait for some proper trailers to see what’s that all about.

Next is a new chunk of gameplay. It represents Cyberpunk 2077’s so-called Braindance gameplay. The scene is an armed robbery but’s in fact a memory recording. Players can relive it from the perspective of the person whose memory the recording is taken from, or from a third-person perspective. You can slow the recording on rewind it, play with it, discover new details of the scene, etc. It’s a scene editor that plays memory recordings. The Braindance is incorporated from Cyberpunk 2020, where it’s used to record memories and experiences.

The Braindance editor used in the game is similar to Witcher Senses in The Witcher games, or Detective Vision in Gotham Trilogy. In the game, V will be able to learn about characters in the game, as well as the story, via Braindance. Developers have talked about the main and side quest design. They’ve noted that CD Projekt Red prepared side quests that are even better in The Witcher 3. According to developers, each side quest is unique and includes story tidbits relevant to the world of Cyberpunk 2077, to its characters, and to the game story. And that’s about it for the first episode of the Cyberpunk 2077 Night City Wire Event. We can expect more new content in the next episode.

As for what we saw, it wasn’t much new stuff but the anime news is pretty cool. Cyberpunk Edgerunners doesn’t feel like a cash grab project. It has serious production and both CD Projekt Red and Netflix behind it. Given the success of the Witcher TV show, we reckon that both Netflix and CD Project Red believe they can reach similar popularity with this anime. Finally, the blade dance gameplay looks cool. We hope it won’t be a one-trick pony, like the Witcher Sense. Cool, but tedious after using it for the 30th time. We hope that the next Cyberpunk 2077 Night City Wire episode will bring more scenes from The Badlands and some driving gameplay.

PREVIOUS POSTBiomutant Is Alive And Kicking, It Also Has A New Gameplay Video

NEXT POSTBorderlands 3 DLC Not Showing Up – Bounty of Blood