Death Trash, one of the most hotly anticipated RPGs of the last several years, gets a permanent Demo up on Steam. During Steam Next Fest, hundreds of games had free demos that players could try out to see if they like the games or not. When this event was over, the majority of those demos were no longer available. Death Trash by developer Stephan Hövelbrinks, is one of the games whose demos are still up and available to download and play. Best described as a fleshier, gorier Fallout with a somewhat trashy aesthetic (hence the name), Death Trash has evolved over the many years since it was first announced and it now looks like its own thing. 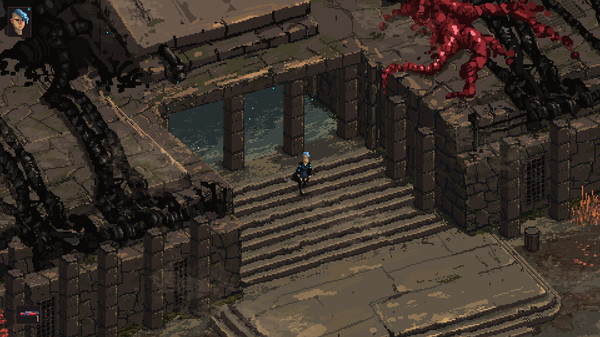 Where Can You Get The Death Trash Demo

You can find the Demo on Death Trash’s Steam page. To play it, all you need to do is click on the “Download Death Trash Demo” button and it will download to your Steam account and you can play it. The game has an Early Access planned release for August 5th. After that, Hövelbrinks is planning to add new chapters and content for at least a year, so we can expect a full Death Trash release sometime in 2022. While its retro pixel art style and post-apocalyptic setting are reminiscent of Fallout (and Wasteland, to a certain degree), the game itself appears to be a lot cruder than its original inspiration.

The combat, too, is also very different. While Fallout 1 and 2 had classic Turn-Based combat, the combat system here is in real-time and appears a lot more dynamic – almost souls-like in difficulty. Some other elements are also thoroughly un-Fallout-like. For starters, one of the skills you can use is Occultism, which gives the entire setting a mystical feel. In comparison, Fallout, while never realistic, was steeped in Science Fiction, not fantasy or H.P. Lovecraft horror. In any case, the game seems absolutely fascinating and we cannot wait to get our hands on the full release. In the meantime, we recommend you give the demo a try.