The new action hack-and-slash game, Hellblade: Senua’s Sacrifice, got an official trailer just a few days before its launch date. The trailer comes just a day after it was announced that the game development is complete and it is ready to be deployed in digital stores. It launches on August 8th, on PC and PlayStation 4.

The game is set in the Viking age. We follow a broken Celtic warrior, who is on a quest to fight for the soul of her dead lover. The game takes place in the Viking version of Hell. The fact that the game was created in collaboration with neuroscientists and people who have experienced psychosis is not to be taken lightly. The Photo Mode, which you can activate in-game with a simple press of a button, can capture the moments you would want to forget.

Ninja Theory is behind this project. They are responsible for the production of games such as DmC: Devil May Cry and Enslaved: Odyssey to the West. Hellblade: Senua’s Sacrifice has been developed by a team of twenty people. 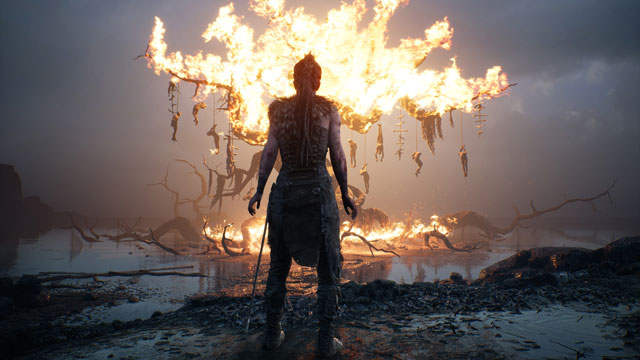 The game can use all the resources one high-end PC has to offer. It can run with an uncapped framerate, in resolutions up to 4K, with support for 21:9 ultra widesreens.

PlayStation 4 Pro users will be happy to know that the game is enhanced for their console. You can choose between the enhanced resolution or a higher framerate of 60 fps.

If you pre-order the game, you’ll receive different goodies, depending on the platform you are planning to play on. If you are a PlayStation user, an exclusive Hellblade: Senua’s Sacrifice Dynamic Theme is the prize. The theme depicts the burning tree scene from the game. PC players, on the other hand, receive an exclusive digital comic short – Hellblade: Senua’s Song.

According to Ninja Theory’s Dominic Matthews, Hellblade is half the size of a AAA game, but sold at half the price, for $30. The game got its release date almost two months ago, when it was announced together with the Ragnarok trailer.

NEXT POSTDead by Daylight Lullaby for the Dark Update 1.6.0 Full Patch Notes