This season Clash of Clans is all about the Shadow theme, embracing a darker and more sinister style compared to the traditional cheerful tone of the game. Introduced in January with the appearance of the Shadow Queen skin, we now even have a new Shadow Scenery background to complete the gloomy atmosphere. And, of course, a new season means a new challenge! If you want to complete the 3 Star Shadow Challenge easily, read on to learn what you need to do. 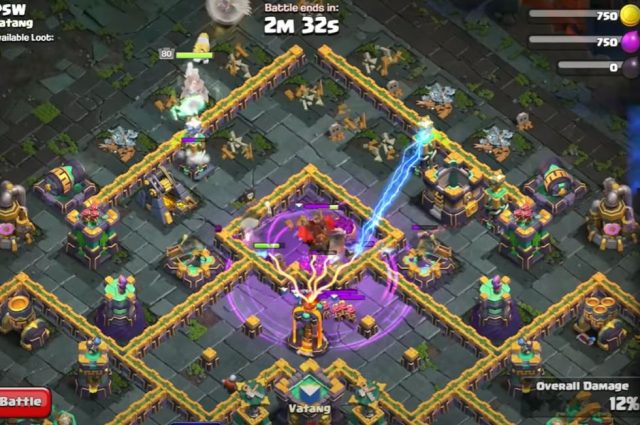 How to Beat Shadow Challenge in Clash of Clans

The new challenge revolves around recreating a matchup from Clash of Clans’ eSports Worlds Warmup Finals. Players will need to use M.S. GAKU’s troop composition while attacking PSW’s base. The challenge also showcases the aforementioned Shadow Scenery background, as well as a new Shadow Warden skin. So, what is the most efficient way to complete the 3 Star Shadow Challenge?

First thing first, your Grand Warden needs to be set to ground mode. Next, set the Archer Queen just above the gold mine, and the Healers right next to her. Now grab your three Sneaky Goblins at put one near each of the three Elixir Collectors at the top. The tree Balloon should move towards the Hidden Tesla at the upper right corner of the base. A Battle Blimp should go just right from the 12 o’clock top corner. Use the Battle Blimp to destroy the Eagle Artillery.

Now grab two Wall Breakers. Place one next to the Multi Mortar on the right, and the second towards the single Mortar on the left wall. At this point, you should also use Rage on your Archer Queen. Next, use the opening on the north and send the King, the Grand Warden, and the Royal Champion towards the Hidden Tesla (in that order). Introduce an Archer on both the left and right corners of the base.

That’s the core opening setup that you should follow. From there, we advise you to check out Judo Sloth’s video guide, as he is an excellent Clash of Clans player and he will guide you step-by-step on what you should do next. Good luck and enjoy your rewards once you complete the Shadow Challenge!