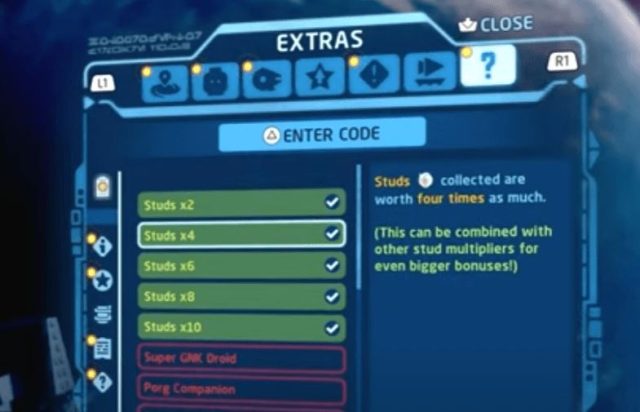 In general, you can earn Studs in The Skywalker Saga by doing practically anything in the game. Just play the game and there will be plenty of opportunities to collect these precious LEGO pieces all around the game. Break things, eliminate enemies, complete missions, solve puzzles… you name it. But of course, you are not here to read about regular ways of earning Studs. You want to know how to earn them in abundance most efficiently.

The first thing we advise is to unlock Stud Multipliers as soon as possible. You can find Stud Multipliers in your Extras tab. Unlocking them will cost you Studs and Datacards, but the return on investment will be huge. Save Studs to purchase at least Studs x2 and x4 in the early game, it will pay off quickly.

Another useful thing is the Attract Studs upgrade. This will not increase your Studs income directly, but it will make collecting Studs much easier, as you don’t need to waste time on getting near to them. And we all know that time is money, thus the less time you spend on reaching Studs, the more you will earn. There are three levels of this upgrade, and you should unlock all three of them.

Investing in the Bounty Hunter’s Hidden Bounties upgrade is another method you should consider. This upgrade will make defeated enemies drop some Studs. It might not look like much at first glance, but it definitely adds up over time. As with Stud Multipliers, this one also has more value if you unlock it early.

Finally, the Skywalker Saga Farm Studs guide wouldn’t be complete without the actual farming part. And the best way to farm Studs is by completing the most efficient missions in terms of time spent and money earned. The best missions to farm studs are “Now This is Podracing” in Episode 1, and “Stay on Target” in Episode 4. Just make sure to completely clear these missions before completing them. Repeat as many times as you want, and that’s how you can earn infinite Studs quickly.

NEXT POSTHow to Beat Shadow Challenge Clash of Clans